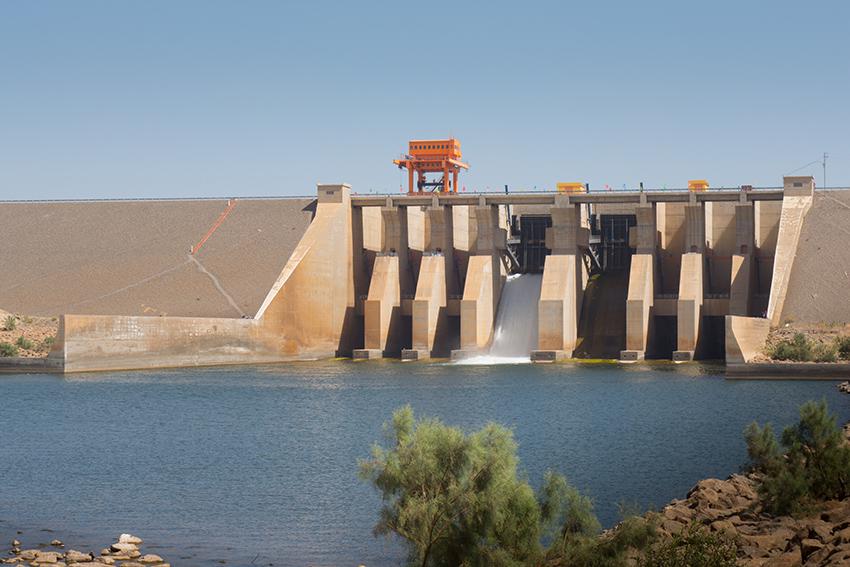 Photo: The Burdana spillway on the Upper Atbara, Sudan

The grid synchronisation of the last power generating unit of the hydropower plant of the Dam Complex of Upper Atbara Project (DCUAP), in the eastern region of Sudan, which was achieved for the first time on 11 June 2018, brought the commissioning phase of the project to completion. That last unit has been in regular operation since then, along with all the previously commissioned generating units. The four vertical Kaplan turbines, each with a generating capacity of 80 MW (93 MVA), now supply the electric grid with a total power of 320 MW and thereby make a significant contribution to the Sudanese electricity supply. The first power generating unit became operational in early 2017, and after an overall planning and construction period of eight years the project implemented by Lahmeyer International is now nearing completion.40 years of experience in SudanLahmeyer International can look back on almost 40 years of working experience in Sudan. The Dams Implementation Unit (DIU) in Khartoum, an institution of the Sudanese Ministry for Water Resources, Irrigation and Electricity, engaged the company at the start of the DCUAP to review existing investigations and studies. Following this initial stage, Lahmeyer established the tender documents, prepared the complete detailed design documents and managed the international tendering process. In addition to the overall project management, Lahmeyer also supervised the construction of this mega project which represents an investment volume of Euro 1.1 billion.Irrigation and flood protectionThe construction work on this scheme began in 2010 with the establishment of extensive site infrastructure works, including two major river bridges. Following completion of the 13 km long dam, which has a maximum height of 41.4 metres, and the spillways, initial impounding of the reservoir took place in 2016. During the planning and design of the system, the Lahmeyer engineers had to take account of the fact that the Upper Atbara and Setit rivers feeding the reservoir exhibit very high water flows during the rainy season. Two independent spillways were therefore designed, with dimensions sufficient to allow the safe discharge of the maximum possible floods – their combined discharge capacity is almost 16,000 m³/sec. For the last three years the active storage volume of the reservoir of 2.5 billion m³ has been providing the owner (DIU) with irrigation water to command 300,000 ha of fertile land. The reservoir is filled each year with the annual floodwater during the rainy season, and the accompanying attenuation helps to prevent flooding downstream of the dam. The planned future expansion of the irrigation systems will increase the irrigated area to 450,000 ha, thereby adding a further dimension to the water management functions of the multi-purpose DCUAP.Drinking water for 450,000 peopleThe stored water is also used to provide a total year-round supply of drinking water of 75,000 m³ per day, to WHO standards, for the 450,000 residents of the capital city of the state of Gedaref (of the same name). The 70 km long, 1000 mm diameter main supply pipeline, which will transfer water from the water treatment plant at the DCUAP site, is largely complete. In support of Lahmeyer International, the company’s subsidiary GKW Consult is involved in the planning and supervision of the “Gedaref Water Supply Project” (GWSP). The owner is also planning for the future expansion of this project in order to cope with the strong population growth in the region, which will result in a doubling of capacity to 150,000 m3 per day.Lahmeyer Since December 2014, Lahmeyer belongs to Tractebel, and thus is part of the ENGIE Group. As an international company of consulting engineers, Lahmeyer offers a wide range of planning and consultancy services. The main fields of activity are complex infrastructure projects in the Energy, Hydropower and Water Resources Sectors as well as in Building and Transportation. With origins dating back to 1890, the company has grown into one of the leading international companies with project experience in 165 countries. Tractebel with head office in Brussels (Belgium) and its subsidiary company Lahmeyer with head office in Bad Vilbel near Frankfurt (Germany) cooperate on many international projects and keep growing closer as one company.Lahmeyer International GmbH Ralf kleine Brörmann Manager Marketing Communications Friedberger Straße 173 D-61118 Bad Vilbel Tel: +49 6101 55 1714 Fax: +49 6101 55 1785 ralf.kleinebroermann@de.lahmeyer.com