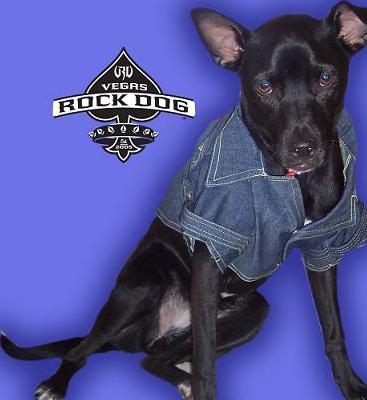 Vegas Rock Dog-September 25, 2006, Las Vegas, NVVegas Rock Dog of Las Vegas is having a year that they could have never dreamed of. Their line of rock ‘n’ roll clothes for hip dogs and humans was officially launched April 1, 2006.to a barking mad reception. The owners of Vegas Rock Dog James D’Arrigo and wife Samantha Ratcliffe-D’Arrigo were inspired to create this line of clothing after an unsuccessful search for cool and hip clothing for their new puppy Galaxy. So after throwing their love of music, Vegas and the love for their dog in the mix Vegas Rock Dog was born. Their company opened with a bang at this year’s Petapalooza where dogs and humans alike donned the new style moniker. What followed was an unexpected invite to place their product in the 58th Emmy Awards gift bag this past August and the orders started to flood in because as we all know the power of a celebrity and their dog wearing your clothing is worth its weight in gold. The hit of the Emmy Awards was their signature camouflage ball cap for humans one of which will be worn by designer Michael Maloney in a future episode of Extreme Makeover-Home Edition on the ABC network. Now let’s skip forward to present time, and the Vegas Rock Dog train still hasn’t slowed down. James and Samantha are gearing up for another star studded event in their own backyard that of the Billboard Awards at the MGM in Las Vegas. They were one of only ten companies selected to be in the celebrity gift bag winning hands down the approval of Billboard officials and Fox Executives. The host for this year’s awards is Justin Timberlake and will prove to be one packed with many musical celebrities all of who will be making their way to Sin City for the festivities. Between planning for the Billboards and filling orders Samantha and James are on the cusp of launching their sister company UK Rock Dog owned by Sarina Ratcliffe-Jones and Siobhan Ratcliffe-Hoyland, Samantha’s twin sister and younger sister respectively. The buzz has already started over in the United Kingdom and they can expect quite a busy latter part of the year just as Vegas Rock Dog will. Fall is going to be a time for new product launches too, these include the unisex vintage tee and the hippest pet carrier seen in any airport and the holidays will show to be an thrilling time for any dog or human fortunate to have a Vegas Rock Dog rock ‘n’ roll tee or cap in their stocking. It appears that 2007 is going to be no different for this entrepreneurial couple and their dog but after all is said and done there is one thing to learn by heart and that is you’re not part of the pack until you’re rockin’ out in Vegas Rock Dog. Rock on!Vegas Rock Dog 115 Montesol Dr Henderson NV 89012 Press contact-James D'Arrigo 702 630-2453 www.vegasrockdog.com contact@vegasrockdog.comRock 'n' Roll Clothes for Hip and Humans

09-25-2020 | Science & Education
Wndsn XPD
WNDSN Range Calculator Dog Tag
Berlin, 2020-09-17 - The best tool is the one that you always have on you, and the WNDSN MIL/MOA Range Calculator Dog Tag takes this saying literally. Upon customer request, WNDSN has developed a version of its popular MIL/MOA Range Calculator in the classic military dog tag format. This is the smallest usable range calculator, a tool that belongs on every explorer's and marksman's neck. Designed for professional and recreational use,
06-30-2020 | Tourism, Cars, Traffic
Aviationtag
THE AMERICAN AIRLINES’ "MAD DOG" IS BACK
In the eighties and nineties, the MD80 gained cult status at American Airlines. Now bordbar® is delivering 9,000 Aviationtags® officially licensed by the airline crafted from one of the planes. Connoisseurs and fans affectionately dubbed it "Mad Dog". Its other nickname, "Super 80", was even used in adverts: "Have a super day", "The Super 80's are coming!" or "Super 80 for the Eighties" were the slogans the MD80 embarked on
09-19-2018 | Business, Economy, Finances, B …
Bharat Book Bureau
Saudi Arabia Dog Food Market Outlook 2023
Bharat Book Bureau Provides the Trending Market Research Report on “Saudi Arabia Dog Food Market” under Food & Beverage category. The report offers a collection of superior market research, market analysis, competitive intelligence and industry reports. Dog food is specially formulated for dogs and other related canines and usually contains meat, corn, wheat, rice, vegetable oil, animal fat, bone meal, etc. Due to unfavourable climatic conditions, owning a dog was not
05-10-2017 | Advertising, Media Consulting, …
QYresearchreports
Global Dog Bowl Market Research Report 2016
This report studies Dog Bowl in Global market, especially in North America, Europe, China, Japan, Southeast Asia and India, focuses on top manufacturers in global market, with production, price, revenue and market share for each manufacturer, covering Neater Feeder PetFusion Elevated Crown Majestic Diamond Outward Hound Fun MidWest Bowls JW Pet SkidStop OurPets Premium DuraPet Loving Pets Bella Bergan Easy Market Segment by Regions, this report splits Global into several key Regions, with production, consumption, revenue, market share
02-14-2017 | Advertising, Media Consulting, …
REPORTHIVE.COM
Global Electronic Dog Sales Market Report 2017
This report studies sales (consumption) of Electronic Dog in Global market, especially in United States, China, Europe and Japan, focuses on top players in these regions/countries, with sales, price, revenue and market share for each player in these regions, covering Cobra Radareye Zenlane Careland ... Market Segment by Regions, this report splits Global into several key
01-03-2017 | Fashion, Lifestyle, Trends
OurK9
Dog Training: Rewarding VS Bribing
Decades of research and studies have shown that using rewards is a key ingredient in the success of dog training. Behaviors that are rewarded are likely to continue, while behaviors that are punished willare likely and eventually to be extinguished. This is basic operant conditioning, and decades of research have shown that, when done correctly, it effectively teaches a dog what choices to make. Some dogs do things because they are
Comments about openPR
I can't but agree to the positive statements about your portal: easy to use, clear layout, very good search function, and quick editing!
Jens O'Brien, Borgmeier Media Communication