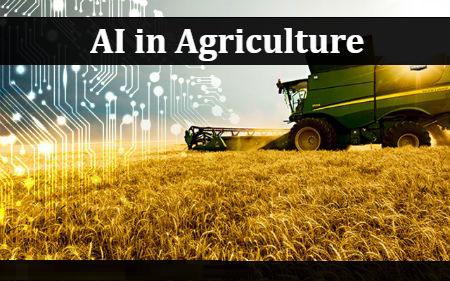 Global Artificial Intelligence Market in agriculture is expected to attain a size of $465.6 million by 2023. The market is expected to witness high growth due to high penetration of internet of things (IoT) in agriculture industry and increasing number of IoT device installations in agriculture. The decreasing price of sensors and increasing adoption of cattle facial recognition are facilitating the market growth. Increasing government support for the development of new farming techniques, and surge in global awareness regarding the benefits of AI in agriculture over the years, are expected to boost the growth of the AI market in agriculture during the forecast period. Among all solutions, crop monitoring is the largest market throughout the period of analysis, and AI-guided drone will be the fastest growing segment during the forecast period. Hardware based products are growing at higher pace than software in the AI market in agriculture. Due to surge in the adoption of AI based agricultural products, installation is the largest service category throughout the period of analysis. Owing to a rising number of agriculture-based startups in Asia-Pacific, the region is expected to witness the fastest growth during the forecast period.

Geographically, North America is the largest region in the AI market in agriculture with the U.S. alone contributing more than 30% of the revenue to the global market in 2016. The country is also expected to lead the global market during the forecast period. Speech recognition, natural language processing (NLP), and animal facial recognition are some of the applications on which the companies in the U.S. AI industry are focusing. The U.K., Germany, and France are the major markets in Europe; while in Asia-Pacific, Japan, India, China, and South Korea are the key markets.

AI in agriculture industry has been thriving on account of growing need for high volumes of agricultural produce. According to United Nations Food and Agriculture Organization (UNFAO), the world will need to produce nearly 70% more food in 2050 than it did in 2006, to feed the growing population. To meet this emerging demand, agricultural companies and farmers are rapidly turning to the benefits of IoT for crop analytics and greater production capabilities. There has been an increased number of product launches from these players in the recent past. For instance, in October 2017, Climate Corporation announced the launch of the Climate FieldView digital agriculture platform in western Canada for the 2018 growing season. Through the new launch’s analytics-based digital tools, Canadian farmers will now be able to harness their data in one connected platform.

Download Report Sample At: https://www.psmarketresearch.com/market-analysis/artificial-intelligence-in-agriculture-market/report-sample
IBM and Robert Bosch GmbH are the top companies operating in the AI market in agriculture. The other key players in the industry include Intel Corporation, NVIDIA Corporation, Climate Corporation, and Microsoft Inc.

P&S Intelligence, a brand of P&S Market Research, is a provider of market research and consulting services catering to the market information needs of burgeoning industries across the world. Providing the plinth of market intelligence, P&S as an enterprising research and consulting company, believes in providing thorough landscape analyses on the ever-changing market scenario, to empower companies to make informed decisions and base their business strategies with astuteness.

You can edit or delete your press release AI Market in Agriculture is expected to attain a Size of $465.6 Million by 2023 here

07-17-2020 | Business, Economy, Finances, B …
P&S Intelligence
Data Center Colocation Market | Covid19 Impact Analysis | Business Outlook, Grow …
Large enterprises are currently the larger users of colocation services, on account of their desire to decrease their operational expenses and increase focus on their more-critical areas. This is being done by giving the responsibility to house their expensive information technology (IT) hardware, such as routers, modems, and servers, to data centers, which also let them store huge amounts of data. Get the Sample Copy of this Report at:https://www.psmarketresearch.com/market-analysis/data-center-colocation-market/report-sample In addition, as
07-16-2020 | Business, Economy, Finances, B …
P&S Intelligence
How Surging Interaction Through Enterprise Messaging Applications Driving Key Ma …
In the wake of the rising cyber attacks, adoption of cloud technologies, and focus on digital transformation, the need to meet the associated regulatory compliance is increasing around the world. Health Insurance Portability and Accountability Act (HIPAA), Payment Card Industry Data Security Standard (PCI DSS), General Data Protection Regulation (GDPR), and Federal Information Security Management Act (FISMA) are the various acts and standards which govern cyber security. Get the Sample Copy
07-16-2020 | Business, Economy, Finances, B …
P&S Intelligence
Digital Out of Home Market Growth Declines, However COVID-19 Pandemic May Bring …
Digital out of home or DOOH refers to digital media displayed in outdoors that is accessible to the public and used for advertising and marketing purposes. It is displayed via electronic displays in a variety of formats, excluding radio and TV advertising. It consists of digital billboards, out of home (OOH) displays, digital signages, LEDs, and screen technologies. Request Sample Copy of Report : https://www.psmarketresearch.com/market-analysis/digital-out-of-home-market/report-sample The digital out of home market is
07-16-2020 | Advertising, Media Consulting, …
P&S Intelligence
Medical Device Outsourcing Market - Future Developments, Trends, and Opportunity …
The healthcare industry is witnessing rapid growth because of the surging prevalence of diseases all across the world. The medical industry does not only deal with drugs and therapy, but medical devices are an important part of it. Attributed to this, the medical devices industry is registering swift growth as well. In 2018, the global medical devices market attained a value of $425.5 billion and is predicted to reach $612.7