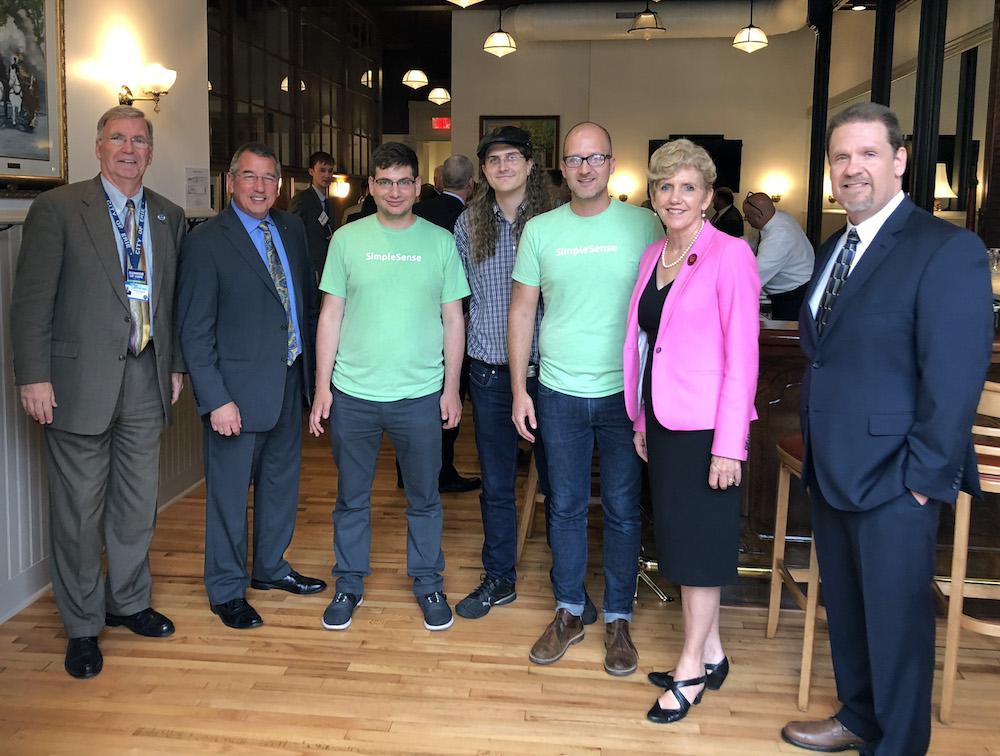 SimpleSense's IoT sensors, installed throughout a building like a fire alarm system, provide smart routes for first responders to people trapped inside the building in an emergency.

The question for the public safety officials is no longer if new IoT technology will improve their operations, but how. By partnering with machineQ™, local fire departments, and the Secure Erie Accelerator, SimpleSense is performing real world tests with their sensors to determine how best to augment existing emergency response operations.

Eric Kanagy, CEO of SimpleSense, leads the company's studies. "Firefighters are rightfully skeptical of new technology, they depend on tried and true tools and procedures that just work. Through talking to many first responders, we've realized we need to complement what they do every day, not replace it."

Singularity University, a benefit corporation at the forefront of global smart cities initiatives, helped the Erie Innovation District launch their new accelerator. Columbus, Ohio, based entrepreneur and investor Matt Armstead is advising startups in the accelerator. "Artificial intelligence and IoT is advancing exponentially and the applications are changing the way people search, control their homes, listen to music and order items. Startups like SimpleSense bring this change to the public sphere, making workplaces and public spaces safer."

By partnering with Comcast and their machineQ™ network to test public safety applications, SimpleSense’s sensors gain longer range communications, deep penetration inside buildings, and battery life of ten years or longer, huge advances over the first generation of cellular-based sensors.

Karl Sanchack, CEO of the Erie Innovation District, is spearheading the Smart Cities initiative that includes the Secure Erie Accelerator as a keystone for bringing new ideas to city infrastructure.

"Startups like SimpleSense are driving the explosive adoption of IoT and Smart Cities technology." Sanchack said. "We're excited to bring 10 startups to Erie for the next ten weeks to help create more intelligent outcomes that help people and give people a better quality of life."

Erie Innovation District partners intend to execute joint projects related to safety and security, specifically in the high-demand fields of data science and cybersecurity, where their combined skills will create a powerful business alliance. For one of their first initiatives, Secure Erie Accelerator, the District partnered with Singularity University to provide opportunities for networking with companies and institutions involved in other disciplines and serve as a catalyst for economic growth.

Current applications of machineQ™ include asset monitoring, utility metering, and environmental monitoring. Identified by Gartner one of the top 10 IoT technologies of 2017 and 2018, machineQ™ announced their Low Power Wide Area Network (LPWAN) in 2016 and has expanded to 12 major U.S. markets since then.

Singularity University is a global community using exponential technologies to tackle the world's biggest challenges. Their learning and innovation platform empowers individuals and organizations with the mindset, skillset, and network to build breakthrough solutions that leverage emerging technologies like artificial intelligence, robotics, and digital biology to create a more abundant future for all.

SimpleSense founded at the Innevator IoT accelerator in Reno, Nevada, in 2017. Their first sensor detects people and how long they're present, like website analytics but for a physical location. Early applications undergoing testing include compliance, security, emergency response, perimeter detection, and border control applications. All data is collected anonymously and complies with all privacy standards.