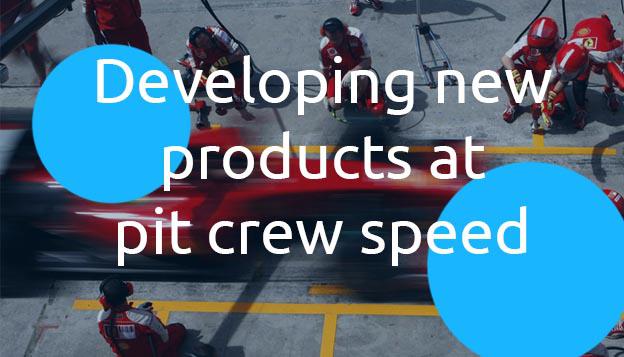 If you google “pit crew” you will find dozens of movie clips from the 5 minute stop in the 1950’ies to the 2 second stop at a recent Grand Prix. Learning, continuous improvement, better tools and training made this possible.In the early clip, one tire changer hammers away at the nuts and changes one tire at a time. This reminds me of the way we used to design tires at Goodyear, except that at Goodyear R&D, the one lonely tire changer would have serviced at least 3 cars at the same time.Today Goodyear works more like the Melbourne Grand Prix crew that changed 4 tires in a couple of seconds.“Wait a moment” – you will tell me: “those guys work for 2 seconds and then the crew of 20 sits idle until the car comes back next time – what a waste!” My answer is that if they can shave a few tenths of a second off the stoppage time, it can lead to victory, which is well worth the investment.The same is true for managing R&D and innovation projects: what really matters is being the first to market. If there is a single engineer on a project and the engineer multitasks and shares his/her time between many projects, the engineer may always be busy (efficient use of engineering resources) but the project will have a long cycle time and the company will most likely lose the “race to market”.Time to market is just as precious for R&D projects than it is for car racing. A few weeks lost, can cost the business millions of dollars and a few months lost can mean second place in the race for market share.The lost business income most often dwarfs the cost of a few extra resources who work in pit crew mode to shave as much time off the development time as possible. At Goodyear a major project was moved up 6 months by sending a “crew” of more than 20 engineers to a plant for a week to build 24 prototypes.In addition to R&D, some companies train their teams in “pit crew” operation like airlines who can increase the time in the air of the planes by a very significant amount by turning them around faster on the ground. Watch the action next time you wait for your plane; with some airlines it resembles a real pit crew.One of the reasons why agile and sprints gain popularity is that R&D organizations start understanding the cost of time and the basic working principles developed by pit crews.Ben Cook, Director of Programming and Pit Crew Recruiting at PIT Instruction and Training educates and trains racing pit crews in Charlotte NC. Ben says that you do not start with speed – you start with a good process and good skills. Speed comes as you learn and get better.Jean-Claude Kihn sponsored a project called “Pit crew” at Goodyear R&D in 2012 when he was the CTO. The project reduced the cycle time of a tire development iteration by 50%. “After all the years Goodyear has spent in racing pits, it was time to apply what we learned there” says Jean-ClaudeBen Cook and Jean-Claude Kihn will share their ideas with Product developers and innovators at the LPPDE North America (Lean Product and Process Development Exchange) at Ohio State on October third 2018.Headquartered in Montreal, Canada, Interfacing Technologies BPM Corporation is a leading provider of Business Process Management (BPM) software tools that allow business users to model, map and manage business processes and knowledge. Established in 1983 as a supplier of MRP software solutions for small and medium-size aerospace and manufacturing companies, Interfacing leveraged its extensive process knowledge and further evolved into the BPM arena in 1993.460 Sainte-Catherine St. W Suite 805, Montreal, Quebec Canada, H3B 1A7

09-19-2018 | Business, Economy, Finances, B …
Interfacing
Interfacing Listed Among the ‘Silicon 70’ by The Silicon Review Magazine 201 …
Interfacing is honored to announce that The Silicon Review Magazine has selected it as one of the ‘Silicon 70’, where the most representative 70 enterprises are listed based on their business strategies, service/product innovation, financial soundness, ability to attract key demographics, and the ability to conduct global business. Interfacing is widely recognized as a global leader in digital business transformation with its flagship product – the Enterprise Process Center® (EPC) –
07-26-2018 | Business, Economy, Finances, B …
Interfacing
Gartner recognizes Interfacing as a Digital Twin Leader
Interfacing Technologies is pleased to announce that it has been recognized by Gartner as a Digital Twin leader. A Digital Twin of an Organization (DTO) is a dynamic software model that organizations rely on for operational understanding of how the organization leverages its business model, connects with its current state, responds to changes, deploys resources, and delivers expected customer value. The goal of DTOs is to digitize the business environment