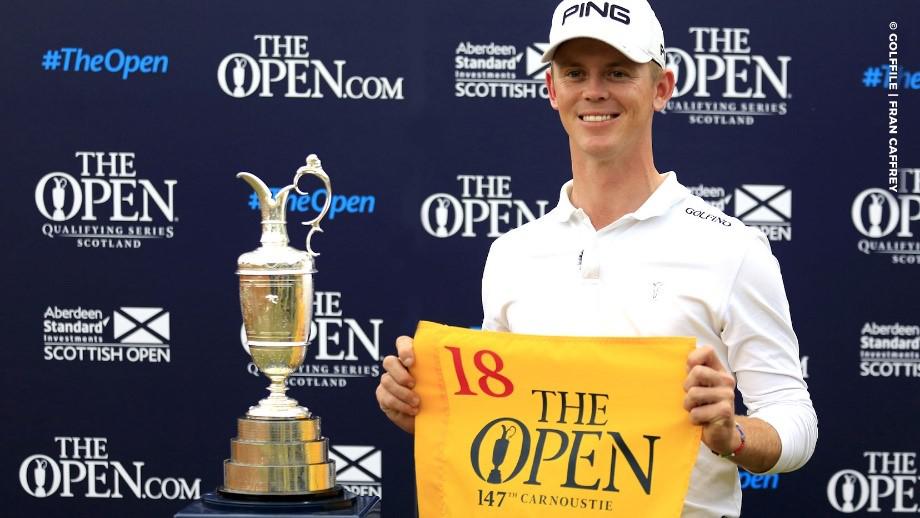 Glinde, 16th July 2018 - GOLFINO Pro Player, Brandon Stone, has won for the first time this season on the European Tour at the Scottish Open. The South African won in style, both in the way he played and in what he wore. He finished with a final round of 60, a course record and European Tour joint record, winning by 4 strokes ahead of Eddie Pepperell with 20 under par. Despite patchy form coming into the tournament, Stones‘ win has also secured him a place at The Open Championship at Carnoustie, Scotland this week. After his 3rd victory on the European Tour, which sees him earn over a million Dollars in prize money and shoot up to 14th in the Race to Dubai points list, the 25-year-old said: “It’s incredible, it was just one of those days where everything went well. Walking on the 18th green, I didn’t even know what the scores were. My caddy had banned me from looking at any scoreboards, but walking onto the 18th green I saw it and was like, ‘oh, here we go’“. Stone also had the chance to be the first player in European Tour history to score a round of 59, but the ball veered centimetres to the left of the final hole. GOLFINO has expanded its sponsoring activities this year to include fellow-South African Breyten Meyer, who plays on the Sunshine Tour, and Lin Xiyu from China, who plays on the LPGA and Ladies European Tours. You can find all information regarding GOLFINO’s team of sponsored players at: https://www.golfino.com/magazine/pro-teamBrandon Stone will visit the GOLFINO Clubhouse in HamburgAhead of the Porsche European Open (26th-29th July 2018) at the Green Eagle golf course, Brandon Stone will be visiting the GOLFINO Clubhouse Hamburg. On Monday, 23rd July, the 3-time European Tour winner sponsored by GOLFINO will be available for golfing tips and tricks and autograph requests from 11:30 onwards in the Hamburg GOLFINO CLUBHOUSE (Hamburger Hof, Jungfernstieg 26, 20354 Hamburg).Formed by Bernd and Christel Kirsten in 1986, GOLFINO remains a family-owned business which provides premium sportswear and casual clothing of the highest quality. With over 40 Clubhouse Stores and Outlets, 800 Retail partners, GOLFINO celebrated its 30-year anniversary in 2016.Humboldtstraße 1921509 GlindeGermany

03-13-2020 | Fashion, Lifestyle, Trends
GOLFINO AG
United Kingdom private equity fund ENDLESS invests in golf fashion company GOLFI …
-GOLFINO headquarters remain in Glinde near Hamburg -Wholesale and e-commerce to be expanded Hamburg, 12th March 2020 A big relief for GOLFINO: The private equity fund Endless takes over golf fashion label GOLFINO. Endless is a private equity fund based in the United Kingdom and owner of the largest European golf retailer, American Golf. The GOLFINO headquarters will remain in Glinde, from where the e-commerce and wholesale business divisions will be
09-02-2019 | Fashion, Lifestyle, Trends
GOLFINO AG
Perfectly styled for both on and off the golf course: GOLFINO presents its curre …
Glinde, 2nd September 2019 – The Summer is almost over therefore GOLFINO, the European Market leader for Golfwear, presents our most up to date styles for the Autumn/Winter Collection 2019/2020 consisting only of high-end Outfits and sophisticated Accessories. The new styles impress with their advanced High-tech Material composition and stunning designs, ensuring you stand out both on and off the golf course. “The felicitous mixture of sporty elegance and functionality
08-30-2018 | Fashion, Lifestyle, Trends
Golfino AG
GOLFINO Presents its New Collections Autumn | Winter 2018/19
Glinde, 22nd August, 2018 – GOLFINO, the European market leader in golf wear, presents its latest Autumn | Winter 2018/19 collections. Immediately catching the eye is the outfit „Tartan“ from the Ladies‘ collection, with its timeless, British golf pattern, where the sport first began, tastefully combining a traditional look with a modern fit. Among GOLFINO’s coordinated outfits for men, which are named after professional players from past and present, is
04-17-2018 | Fashion, Lifestyle, Trends
GOLFINO AG
Relaunch of golfino.com - first-class brand presence with a fresh design and new …
Europe’s market leader for golf wear introduces the redesign of its online store. At www.golfino.com, GOLFINO now offers its customers a wide range of new, customer-friendly functions. At the core of the updated website is the use of a new shop system. The software “Shopware” significantly enhances the emotional and diverse shopping experience in the GOLFINO online store. The main focus of the redesign was a more clear and modern