A Woman in a Man's World


Press release from: This Film Harrogate 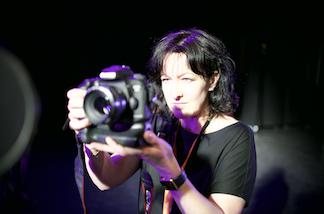 Katie Greenhalf Behind The Lens

Quietly producing some of the best corporate videos in the UK today is This Film, a film production and filmmaking company based in the beautifully artistic and entrepreneurial North Yorkshire town of Harrogate.Katie Greenhalf, owner of This Film has been a renowned film producer for over 20 years, with a client list that reads like a who’s who of the UK’s top businesses and world-famous household names. Somewhat under the radar, This Film doesn’t boast about client work or exciting projects, even though Katie has filmed the likes of arguably the most famous British author of all time J.K.Rowling, she makes films on a monthly basis with top FTSE100 companies, Rudding Park Hotel voted a top 10 hotel in the country by TripAdvisor Travellers’ Choice 2018, the NHS, the Police and one of the most prolific British Chefs of this decade, Tom Kerridge to name just a few. Katie Greenhalf, owner of This Film says; “I’ve always been a film maker, piecing together the jigsaw of footage is always the most exciting time - seeing my ideas come alive on screen is the best part. I have been extremely lucky to always have interesting clients to work with and a great team behind me. No two days are the same, one minute I’m suited and booted in the offices of a major FTSE100 client, the next day I’m backstage at a festival or wearing a hardhat and steel toe-cap boots around a factory. I’ve always just got on with it, and I’ve never really thought about being a woman in a fairly male dominated industry, but I must admit that I do get excited when I hear of another woman running a film production company because we’re still a bit of a rare breed. It makes me so happy that roles like mine, predominantly seen as male jobs, are being taken more and more by women - as they should! I’m still loving what I do 20 years later, however it’s not always plain sailing.”Based in Harrogate with her family, Katie has first hand experience of the challenge of running a business and a very busy home life.Katie goes on to say; “Film making is a very time consuming process, the filming is roughly a third, maybe even only a quarter of the process! Because the edit is where my passion lies, it’s not unusual at all for me to keep editing overnight once the kids are in bed, luckily we are only a short walking distance for the sometimes bleary eyed school drop off in the morning!” With as many as 16 projects on the go at any time, the kids sometimes have to help out and come along. My husband works away a lot so the kids get to be roadies and sometimes have cameo appearances. My 12 year old is getting quite handy with a camera now, which could be very useful in a few years if the business continues to grow like it has done over the last few.Everyone is a film maker nowadays so it can be hard to stand out, but I know that people will continue to want quality video for their businesses in the same way they want quality design and photography. I appreciate that watching a video is like looking into the eyes of your business. I’m Harrogate based and have worked with mega stars, local stars, big business, independent business, and little start-ups. Anything is possible if you train hard, work hard and push for success. Never mind being a woman in a man’s world, I’m a filmmaker in a world filled with YouTube, Insta Stories, and FB where everyone can make a film – but only a few manage to do it properly!”Katie rebranded her business to This Film recently, where she continues to work as a film producer and filmmaker for clients including; Dartington Crystal, Rudding Park Hotel & Spa, Neom Organics London, The Great British Exchange Ltd, Harrogate Borough Council, Harrogate Convention Centre and many more. www.thisfilm.co.ukKatie Greenhalf is the owner of This Film, a creative and corporate video production company based in the heart of North Yorkshire, Harrogate.This Film Harrogate, North Yorkshire, England, UK Katie Greenhalf, Company Owner katie@thisfilm.co.uk 07870563011Press contact: Rachel McAlley Rachel McAlley Marketing Wombleton Caravan Park, Moorfields Lane, The Airfield, York, YO62 7RY rachel@rachelmcalleymarketing.com 07963577034

10-13-2017 | Arts & Culture
ReSource Marketing
Finding Susan by Katie Mettner Takes On Important LGBTQ Issues
The author Katie Mettner takes true story told to her, fictionalizes it, and brings to life a real life story of deceit, acceptance, and the quest to find true love, while staying true to yourself. BOOK BLURB: The last thing Renay Skovgaard expected was to find herself a victim of a catfisher. No stranger to online dating, Renay didn’t see it coming until it was too late, and she’d
09-26-2017 | Arts & Culture
Mill Town Music Hall
Classic Nashville Roadshow Featuring Katie Deal and Jason Petty to Perform at Mi …
BREMEN, Ga. (Sept. 22, 2017) - Mill Town Music Hall invites you on a journey down memory lane with the Classic Nashville Roadshow, featuring Katie Deal and Jason Petty, on Thursday, Oct. 5 at 7:30pm EST. Deal and Petty mix classic country music and theatre in their tribute to late stars Patsy Cline and Hank Williams. Mill Town Music Hall focuses on family-friendly music and events and is located conveniently
01-23-2017 | Fashion, Lifestyle, Trends
Worldwide Business
Global Cosmetic Brush Market 2017 : Harvey Nichols, David Jones, Mineralogie, Ka …
A market study based on the " Cosmetic Brush Market" across the globe, recently added to the repository of Market Research, is titled ‘Global Cosmetic Brush Market 2017’. The research report analyses the historical as well as present performance of the worldwide Cosmetic Brush industry, and makes predictions on the future status of Cosmetic Brush market on the basis of this analysis. Get Free Sample Copy of Report Here : http://bit.ly/2iTsdL6 Top Manufacturers
12-10-2010 | Leisure, Entertainment, Miscel …
Save Me A Ticket
Katie Melua Concert Tickets
Singer song-writer Katie Melua is on tour. Upon making her singing debut in 2003 at the tender age of 19 with the release of Call off the Search, her status as a gifted singer-songwriter has been further cemented. In 2006, she was Europe's highest selling European female artist and the bestselling female artist in the UK. Her second album, Piece by Piece, was released in September 2005. It has
10-03-2010 | Leisure, Entertainment, Miscel …
AristoMedia
Katie Armiger Packs House at SESAC for CD Release Party
(Nashville, Tenn. – Sept. 30, 2010) A standing-room only crowd turned out at SESAC Wednesday, Sept. 29, to hear Cold River recording artist Katie Armiger perform songs from her forthcoming Oct. 5 release, Confessions of a Nice Girl. Armiger was joined on stage by several of the album’s co-writers and contributors, including Chad Carlson, Amanda Flynn, Rebecca Lynn Howard, Shanna Strassberg, Bruce Wallace and Joe West. The event
03-04-2010 | Politics, Law & Society
Taber Estes Thorne & Carr PLLC
Taber Estes Thorne & Carr Adds Litigator Katie Anand
DALLAS -- The Dallas-based law firm of Taber Estes Thorne & Carr PLLC is pleased to announce that Katherine M. Anand has joined the firm as an associate attorney. Ms. Anand’s practice focuses on commercial litigation and dispute resolution, representing clients before state and federal courts at both the trial and appellate levels. Her litigation experience includes cases involving breach of contract, negligence, fraud and misrepresentation, oil and gas disputes, intellectual
Comments about openPR
9 o'clock: discuss press release with client, 10 o'clock: submit release to openPR, within the briefest possible time release is published and displayed in a prominent place on openPR.de. I am thrilled!
Zehra Spindler, Calypso Now! - Communication Agency