Ethics and Morality of Robotics


Press release from: Vienna Center for Logic and Algorithms at the TU Wien 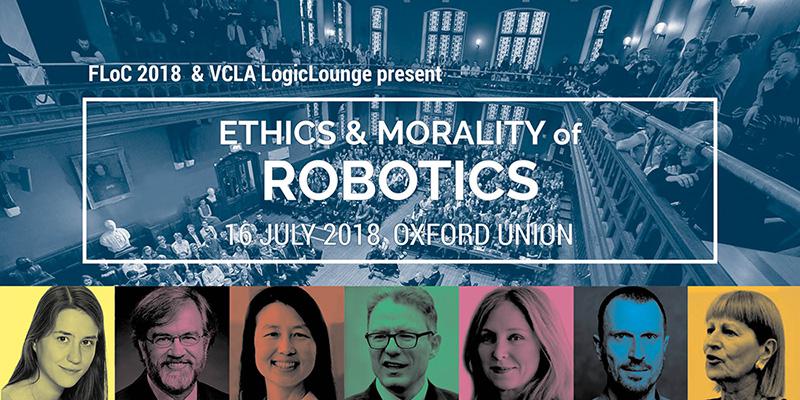 A public panel discussion and debate at the Oxford Union, July 16, 2018Robotics and artificial intelligence (AI) are becoming ever more prevalent in our society, exerting widespread impact on our daily lives. From self-driving cars, to robots taking over manufacturing jobs, and big data and algorithms influencing public policy, robotics and AI are transforming humanity as we know it. At the same time, there are few occasions where the public can engage directly with experts to discuss where robotics and AI might lead us, and above all, what the ethical and moral considerations should be as we are building towards a future of co-existence with robots and AI. With over 400 participants, the upcoming LogicLounge on Ethics and Morality of Robotics taking place at the Oxford Union Debating Chamber, on 16 July 2018, 4pm, is filling this gap. In this public panel discussion and debate, we bring together the general public and experts in the fields of computer science, philosophy, law, to discuss the profound ethical and moral implications of robotics, and how a society should gear up for such change.The public panel discussion and debate will be moderated by Judy Wajcman, Anthony Giddens Prof. of Sociology at the London School of Economics and Political Science. She will be joined by a distinguished list of panellists: Luciano Floridi, Professor of Philosophy and Ethics of Information, University of Oxford Ben Kuipers, Professor of Computer Science and Engineering—specializing in robotics, University of Michigan Francesca Rossi, AI Ethics Global Leader / Distinguished Research Staff Member at IBM Research AI, and Professor of Computer Science—specializing in artificial intelligence, University of Padova Matthias Scheutz , Professor of Computer Science—with a background in logic and cognitive science, Tufts University Sandra Wachter, Lawyer and Research Fellow, University of Oxford and Alan Turing Institute, Jeannette Wing, Avanessians Director of the Data Sciences Institute at Columbia University, former Corporate VP of Microsoft Research with expertise in security and privacy The LogicLounge on Ethics and Morality of Robotics benefits from a confluence of many of the most prominent computer scientists world-wide attending the large-scale Federated Logic Conference 2018, located in Oxford this summer. The panel discussion is co-organized by the FLoC 2018, and the Vienna Center for Logic (VCLA), the latter of which holds regular LogicLounges, in locations such as Toronto, Heidelberg, Vienna and New York. Since its inception at the Vienna Summer of Logic in 2014, which brought together almost 3000 scientists in the fields of logic, philosophy, mathematics, computer science and artificial intelligence, LogicLounge continues to bring together the general public and experts in public debates and discussions. More on the debate and LogicLounge: http://www.vcla.at/2018/03/logiclounge-ethics-and-morality-of-robotics-the-oxford-union-debate/ Event Organisers: Prof. Georg Weissenbacher Technische Universität Wien – TU Wien Vienna Center for Logic and Algorithms – VCLA Email: georg.weissenbacher@tuwien.ac.atMarta Kwiatkowska University of Oxford Department of Computer Science Email: marta.kwiatkowska@cs.ox.ac.ukMay Chan Federated Logic Conference 2018 – Public Debate Organizer Email: may.chan@oxon.orgPR and Media Relations Mihaela Rozman Technische Universität Wien – TU Wien Vienna Center for Logic and Algorithms – VCLA Email: mihaela.rozman@tuwien.ac.atThe Vienna Center for Logic and Algorithms (VCLA) is an initiative of Technische Universität Wien – TU Wien (Vienna University of Technology). Located at the Faculty of Informatics, the Center is promoting international scientific collaboration in logic and algorithms. Moreover, the VCLA outreach activities are aimed towards raising aspirations of young people for academic pursuits and to raise awareness on the impact of the research done in the areas of logic, philosophy, mathematics, computer science and artificial intelligence among the general public alike. VCLA is coordinated by the executive board in consultation with the local board while taking into account the strategic advice from the international advisory board. The acting chairs are Agata Ciabattoni and Stefan Szeider.Vienna Center for Logic and Algorithms der TU Wien Technische Universität Wien, TU Wien Institute of Logic and Computation Favoritenstraße 9-11 1040 Wien, Austria

07-06-2020 | Politics, Law & Society
Vienna Center for Logic and Algorithms at the TU Wien
Invitation to a live public debate --- LogicLounge with Cory Doctorow: Surveilla …
The 18th instalment in the public lecture series LogicLounge with Cory Doctorow will take place on July 21, 2020. Due to the COVID-19, instead of Los Angeles, the venue of this admission-free discussion hosted by the 32nd International Conference on Computer-Aided Verification (CAV 2020) is virtual Zoom room. The term surveillance capitalism was broadly defined by the Harvard professor Shoshana Zuboff as a market form where the products are
10-21-2019 | Science & Education
Vienna Center for Logic and Algorithms at the TU Wien
Austrian pupils successfully set a world largest sorting network - based on CS U …
With a successful world record attempt in Vienna, digital processes were translated into the analogue world, marking the kick-off of project ADA run by VCLA of TU Wien (Vienna University of Technology). It is very easy to understand basic elements of computer science such as algorithms or sorting networks if one takes into one´s hand one of the most influential collections of materials for teaching computational thinking without using digital technology
07-10-2019 | Science & Education
Vienna Center for Logic and Algorithms at the TU Wien
LogicLounge with Eva Galperin: Spouseware, Stalkerware, and Citizen Surveillance
After Oxford and Vienna, the upcoming public talk in New York on July 15, 2019, at 5 pm in Tishman Auditorium is already the 15th in the series of LogicLounges which feature discussions between the public and the eminent scientists in the fields of logic, philosophy, mathematics, computer science, and artificial intelligence. The speaker at this LogicLounge, Eva Galperin is the director of cybersecurity at Electronic Frontier Foundation (EFF), which champions