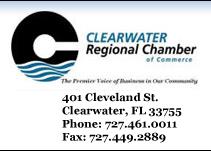 The Clearwater Regional Chamber of Commerce and the Clearwater Arts Foundation are developing a closer partnership, which they believe will enhance the community through the infusion of the arts and boardroom boundaries of the business community. Clearwater, FL, August 17, 2009 - Studies have shown that art has a significant economic impact on the economy. Knowing that cultural institutions are a key part of economic revitalization, the Clearwater Regional Chamber of Commerce (CRCC) and the Clearwater Arts Foundation are forming an alliance. The CRCC and the Arts Foundation feel that by forming a partnership their impact on Clearwater will also prove advantageous. The Chamber will also work in conjunction with the Arts Foundation to host artist's symposiums in order to work on marketing and strategic planning and other related topics. The CRCC will become a clearinghouse for artists and the two organizations will link to each other’s web sites. In support of the new partnership the chamber will be introducing a new committee open to all Clearwater Chamber members. 'Cultural Tourism' is the subset of tourism concerned with a country or region's culture, specifically the lifestyle of the people in those geographical areas, the history of those peoples, their art, architecture, and other elements that helped shape their way of life. It is generally agreed that cultural tourists spend substantially more than standard tourists do. This form of tourism is also becoming generally more popular throughout the world. Arts and culture enrich our lives, enhance our community and broaden our boundaries. The Clearwater Chamber and its many partners are making systemic changes to bring life and the vision of a better world into the business community for the sake of the economy. Established in 1922, the Clearwater Regional Chamber of Commerce set out with the vision to be the premier Voice of Business in the Clearwater region. Representing more than 1,400 member businesses, the Clearwater Regional Chamber of Commerce (CRCC) is one of the largest chambers in the Bay area and has become a large and powerful voice for its members through its ability to partner with other agencies and advocate on behalf of business and its members. CRCC's mission is to enhance the business environment and promote economic health and growth in the Clearwater region. Visit http://www.clearwaterflorida.org/ 401 Cleveland Street Clearwater, FL 33755 United States

04-02-2019 | Arts & Culture
The Business research company
Arts Global Market Report To 2022
The arts services market consists of sales of arts services and related goods by entities (organizations, sole traders and partnerships) that operate facilities or provide services for cultural, entertainment and recreational interests such as producing live performances or events and preserving and exhibiting objects of the art-related interests of patrons. Revenues in this market include entry fees to theatres and art galleries and royalties. Arts Global Market Report 2019 from The
02-20-2019 | Arts & Culture
The Business research company
Arts Market | Characteristics, Forecast Size, Trends
The arts market size is expected to reach $550 billion by 2022, significantly growing at a CAGR of around 4.9% during the forecast period. Order the report at: https://www.thebusinessresearchcompany.com/report/arts-global-market-report Arts Global Market Report 2019 from The Business Research Company provides strategists, marketers and senior management with the critical information they need to assess the global Arts market. Description: Where is the largest and fastest growing market for Arts? How does the market relate
09-20-2017 | Logistics & Transport
Orbis Research
Fine Arts Logistics Market: Increasing E-Commerce Fine Arts & Fine Arts Auction …
Fine arts logistics includes transportation, packaging, storage, and import clearance of fine arts collectibles, such as arts, paintings, antiques, and sculptures. All artworks are stored in specialized humidity and temperature controlled warehouses, which are equipped with security web-enabled cameras and closed-circuit televisions. The total sales of the global fine arts logistics market accounted for more than $50 billion in 2016. The sales revenue of the global fine arts market was
02-26-2016 | Arts & Culture
York Fine Arts
Spring Exhibition at York Fine Arts
York Fine Arts is delighted to announce the gallery’s upcoming Spring Exhibition. The exhibition brings together an invigorating collection of original paintings inspired by the spectacle and experience of spring. An eclectic compilation of both traditional and contemporary pieces, the Spring Exhibition features artwork from some of the gallery’s most popular artists, including Edward Hersey, Gordon Lees, Daniel Van der Putten, Terry Evans and Michael James Smith. A beloved time
08-15-2011 | Leisure, Entertainment, Miscel …
Olive PR Solutions
September is "Arts Month San Diego"
Known for 70 miles of beaches and year-round mild weather, San Diego offers visitors arts and culture happenings that are just as dazzling as its Pacific Ocean views. During September, visitors can enjoy the vibrant local arts communities and help celebrate “Arts Month San Diego”. A month-long festival that celebrates the vibrancy and diversity of San Diego’s thriving visual and performing arts scene. San Diego, CA, August 12, 2011 --
03-04-2011 | Arts & Culture
Prana Marketing
bergenPAC Launches beyondEDUCATION Premier Arts Education Classes
Enrollment Open Now for beyondDANCE, beyondTHEATER, beyondRECORDING and beyondSTAGE-- Dance under the same lights shared by Alvin Ailey and Ne Yo - Record with the same microphone as Tony Bennett and Sting- Perform in the same theater as Steve Martin and Lewis Black. Now your child can share the same stage as all these artists while gaining world class instruction and a deeper appreciation of arts and culture. bergenPAC, the
Comments about openPR
OpenPR ist the nicest and most clearly laid out PR platform I have seen to this day. The press releases are displayed very nicely and clearly and without any unnecessary frills. The updates are fast and the finished release looks appealing and is clearly legible. Even with 16 years of experience one discovers new things from time to time. Congratulations!
Gabriele Ketterl, Director Marketing & PR, Menads