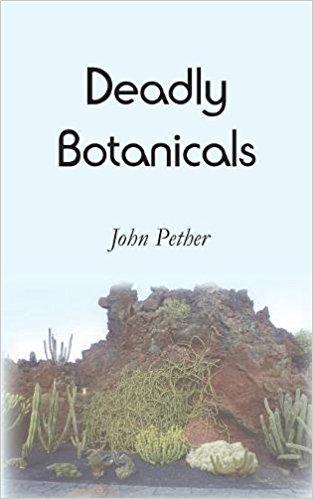 ISBN #978-1787197701“Deadly Botanicals” by John Pether is published About the book:The horticultural market is overwhelmed with beautiful, cheap plants. The scent is strongly hallucinogenic, but genetically engineered to be toxic. Petra Wallace, a botanist, and Julian Bailey, a scientist, detect an extraordinary plot created by the Kingdom of Plants to eliminate mankind. They have to unravel the plot by all the means at their disposal.Excerpt from the book:“Deliberate poisoning is now rare, but having listened to Julian I would like to draw your attention to the considerable amount of cyanogenetic glucosides, indeed, hydrocyanic acid itself, that have been detected in many plants. Amygdalin, a potent source of cyanide, is found in bitter almonds from the original wild almond tree, from which a major mutation produced all our edible almonds.It is also found in many fruit kernels; peach, plum, apricot, cherry, even apple pips. You would have to eat five pounds of apple pips to produce a detectable level of cyanide in the blood.” David obviously thought his last statistic was enormously funny but he only shrugged his shoulders when they failed to laugh. “In the tropics, quite substantial amounts of cyanide are found in cassava which is the sustaining carbohydrate for at least two hundred million people. If cassava is not cooked properly, as much as two hundred and fifty milligrams can be released from a hundred grams of fresh root. A fair number of deaths do sadly occur. And there is a curious paralytic disease of the nervous system that is the result of repeated sub-lethal doses of cyanide. In other words, it is better that you leave the top off the pot and don’t sniff the porridge.” David laughed at his little joke. A self-sufficient man immersed in his science. This time he did not expect his audience to respond.”“Deadly Botanicals” is currently available in paperback from Amazon at:https://www.amazon.co.uk/Deadly-Botanicals-John-Pether/dp/1787197700Press/Media Contact Details:New Generation Publishing Tel. 01234 711 956 E-mail: info@newgeneration-publishing.comNew Generation Publishing is a professional publishing company in England.107-111 Fleet Street London, England EC4A 2AB

05-07-2020 | Arts & Culture
Office PHILEMOND
"JOHN SILVER" Movie In Works
EXCLUSIVE: Rob Schmidt has been set to direct John Silver, a new animated film from European company Office PHILEMOND, based on Robert Louis Stevenson's character Long John Silver. Pre-production gets underway later this month in Ireland. The plot is kept under wraps. "We're telling a new story with a familiar character", Philemond-Montout said. "It'll be a mix of the original Long John Silver with an Anime influence. We're thrilled to propose
01-29-2013 | Business, Economy, Finances, B …
BeamaLife Corporation
BeamaLife Corp. Hires John Collins
Piscataway, NJ - January 28th, 2013 BeamaLife Corporation, one of New Jersey's leading life insurance firms announced today the hiring of John Collins as their Senior Vice President in their large corporations and banks division. John Collins, a twenty five year veteran of business development, sales and team leadership, is leading BeamaLife’s Large Corporations and Banks division. He is in charge of expanding the division and accelerating the growth of BeamaLife’s portfolio
06-02-2011 | Politics, Law & Society
Jackson Walker L.L.P.
Jackson Walker Welcomes John W. V. Schwartzenburg
HOUSTON – Jackson Walker is pleased to welcome partner John Walter Van Schwartzenburg to the firm. Mr. Schwartzenburg joins the Energy group in the Houston office. Mr. Schwartzenburg represents clients engaged in electrical power generation, natural gas pipeline, and other infrastructure businesses and related engineering, manufacturing and construction fields. He assists clients with respect to the acquisition of assets and companies, development of green field and brown field projects, turnkey engineering,
05-24-2011 | Sports
P1 Groupe
Wimmer John Deere Dealers 250 Preview
NASCAR Nationwide Series Driver Scott Wimmer, currently 20th in the 2011 NASCAR Nationwide Series Driver Points standings, will climb aboard the #70 Foretravel Chevrolet Impala for ML Motorsports this weekend for the John Deere Dealers 250 at Iowa Speedway. “I’m really excited that the team wanted me in their car for this weekend. I’ve only run one Nationwide event at Iowa so far and had a good run going there a
10-28-2010 | Arts & Culture
Stagevisions
Spirit of Scotland John Cashmore
On Thursday 4th November at 19:30 in the Johanniskirche in Düsseldorf, the British Opera star John Cashmore will be presenting his Scottish concert „Spirit of Scotland“. You may already know of John from his performances in NRW in Eric Woolfsons musical Gaudi, West Side Story, Bernsteins Mass and concerts with the WDR rundfunkorchester. This is the 5th tour station of Spirit and a chance to see this lovely concert full of
05-25-2007 | Arts & Culture
Agora Gallery
John Porro Exhibits in New York
John Porro uses stark, economical lines to let the human body tell visual stories about the world around him. His drawings pay subtle homage to the work of the German Expressionists, and particularly to Austrian artist Egon Scheile. However, Porro goes beyond Scheile and enters a sphere of intimacy with his subjects. Porro’s focus is divided equally between the lines, the spaces created by those lines, and the jagged spaces
Comments about openPR
Your portal is fast, simple, and easy to use. Others may have more functions but they also demand more editing time, you have to preformat the text in order to achieve a good result etc. I think openPR is really fantastic!
Andreas Knepper, wallmedien AG