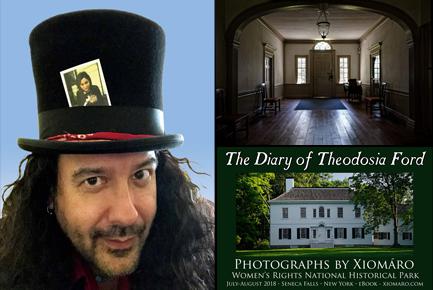 The Diary of Theodosia Ford - Photographs by Xiomaro

Ask the average person to name an important woman of the American Revolution and they might think of Betsy Ross, believed to have made the first American flag for George Washington. A fine art photographic exhibit opening on July 1 at Women’s Rights National Historical Park seeks to introduce a new name into the public consciousness: Theodosia Ford.The park celebrates Independence Day with the debut solo exhibition "The Diary of Theodosia Ford - Photographs by Xiomaro," on view until August 31, 2018. The images, together with an imagined diary based on factual accounts, tell the dramatic story of a young widow’s unsung role in the colonial fight for freedom. Theodosia and her four children crammed into two rooms from 1779-80 – during one of the worst winters of the century – and gave up control of her New Jersey home to George Washington and his entourage for use as his military base.Xiomaro explains that the house was ideal because it was strategically located between Philadelphia and the British stronghold in New York City. Conditions, however, were harsh. The house was crowded with the General’s assistants, servants and slaves, his wife Martha, and towering personalities such as Alexander Hamilton, Marquis de Lafayette, Philip Schuyler, and Benedict Arnold. Yet, Theodosia, persevered with the domestic upheaval, the deaths of several close family members (including her toddler), and the worst winter of the century with more than 20 brutal snowstorms. Demoralized and weakened soldiers living in a nearby encampment suffered with starvation, nakedness – some only having a blanket – and the agonizing temperatures described by a soldier as “cold enough to cut a man in two.”Other difficulties included the court-martialing of Benedict Arnold and the death of a Spanish Ambassador from fever. There were some bright moments, however. It was at Theodosia’s house that Alexander Hamilton met and fell in love with Elizabeth Schuyler, famously dramatized in the Broadway play "Hamilton."Theodosia never remarried, continued to run the farm, and her husband’s business operations. She remained in the house until her death in 1824. “She proved to be as independent as the country that became the United States,” notes Xiomaro. “Like Washington, she was a resilient leader who fought many personal battles.”The exhibition of 12 images are drawn from a collection of almost 100 photographs of the Ford mansion that Xiomaro (pronounced “SEE-oh-MAH-ro”) was commissioned to create for the National Park Service at New Jersey’s Morristown National Historical Park. Each 17”x25” image is accompanied by a compelling narrative written by the artist. “The events and dates are factual, but I presented Theodosia’s story as an imagined diary that dramatizes what her feelings might have been as she and her four children lived through this very difficult time in history,” explains Xiomaro.Xiomaro is an internationally-recognized artist and speaker. His work has been widely exhibited at Harvard University, museums, and galleries. Next year, Arcadia Publishing is releasing his photo book, Weir Farm National Historic Site, about Julian Alden Weir, the father of American Impressionist painting.Women's Rights National Historical Park is the site of the first Women's Rights Convention on July 19-20, 1848. The park’s gallery is located on the second floor of its Visitor Center at 136 Fall Street, Seneca Falls, New York 13148, and the free exhibition runs from July 1 to August 31, 2018. Visiting hours are 9:00 am to 5:00 pm, seven days a week. A free limited edition exhibit ebook of the photographs can be downloaded at www.xiomaro.com, which includes free entry into a giveaway of the book, "The Fords of New Jersey" by Jude M. Pfister (The History Press) and a 5”x7” print from the exhibit.Xiomáro is a nationally recognized artist, curator and speaker from New York specializing in photographing National Park sites to raise awareness of their history, culture and natural beauty.Xiomaro | Art Studio | New York 192 Garden Street, Suite 2 Roslyn Heights, NY 11577

You can edit or delete your press release U.S. National Park Service Presents "The Diary of Theodosia Ford - Photographs by Xiomaro" here