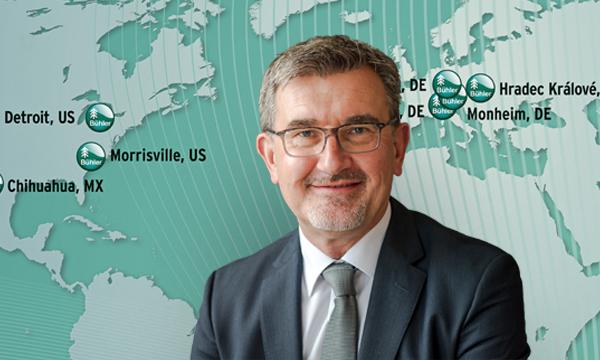 Nuremberg, June 6, 2018 – Karl Wagner took up his new post as Vice President Program Management North America with Buehler Motor, Inc. on March 19. Prior to joining Bühler Motor, Karl Wagner had worked for 18 years for various divisions of Borg Warner, most recently as Vice President Sales & Engineering Thermal.His expertise will enable him to take Bühler Motor’s international focus to the next level and besides strengthening the profile of the company as a technology leader of electric drive solutions further develop its position as global system supplier.In addition, Karl Wagner will shortly be assuming overall responsibility for all the activities of Bühler Motor in the North American market, with the business sites in Morrisville, North Carolina (North American Tech-Center), Farmington Hills, Michigan (Sales- and Tech-Office) and Chihuahua, Mexico (Production), as President and General Manager. In this position, he succeeds Mark Furtwaengler, who has held this position since March 2016 and will be moving to the Headquarter in Nuremberg, Germany at the end of this year."Karl Wagner is exactly the person I wanted as my successor. Apart from his professional qualification, he is at home in both cultures and has spent most of his career to date working for American-run and American-influenced companies" emphasized Mark Furtwaengler, President and General Manager of Buehler Motor, Inc.The assets that Karl Wagner brings to the company include in-depth experience in the field of permanent change processes. His core skills also include the development of strategies and product solutions for specific market segments."We are pleased to have Karl Wagner as a proven expert in globalization and localization. Karl Wagner is strengthening us at exactly the right time," emphasized Peter Muhr, President and CEO of Bühler Motor Group.About Bühler MotorBühler Motor stands for demanding, custom-made, and reliable mechatronic drive solutions with DC/BLDC small motors and gear motors and pumps. The company, which was founded in 1855 and has been owned by the Furtwängler family for over 125 years, is a German, medium-sized family company and, as a global Hidden Champion, combines tradition and innovation.More than one out of every ten employees at Bühler Motor works in Research and Development. Our in-house sample shop and R&D department, combined with state-of-the-art test labs, enable Bühler to concentrate completely on quick and flexible development of customer specific drive solutions.1,750 employees worldwide ensure successful development, industrialization and production of mechatronic drive solutions for mid- to high volume applications.With eleven locations on three continents and highly developed process competencies, Bühler Motor is able to fulfill all customer requirements for short transit times, quality, and on-time delivery at the required volumes.The company’s strategic markets include the automotive market, the healthcare equipment market, general industrial solutions in the fields of building automation, agriculture, transportation and seat actuation for aviation.www.buehlermotor.comBühler Motor GmbH Roswitha Gries Corporate Communication Anne-Frank-Straße 33-35, 90459 Nürnberg Tel.: +49 911 45 04-1129 Fax: +49 911 43 08 69-1129 e-mail: Roswitha.Gries@buehlermotor.com