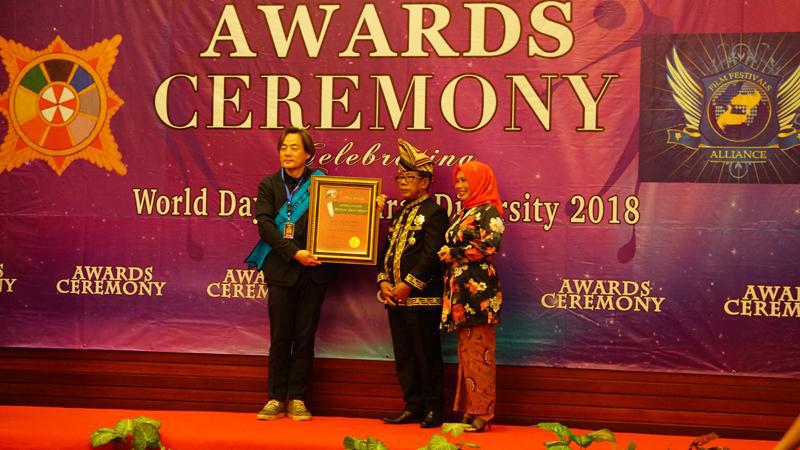 Jakarta, Indonesia -- Jakarta Film Awards (JFA) just announced their lineups for this year. The international film festival held its Awards Ceremony at the Taman Mini Indonesia Indah, the Indonesian Cultural Park, celebrating the 43rd anniversary of the National Park. The Awards Ceremony is a blast with red carpets, and crowds flooded packed the place. Kings and queens of Indonesia, many ambassadors, artists, filmmakers, and cultural society attended the big event.This year, Jakarta Film Awards received 251 films from all around the world. Four films from different countries compete for the Best Film. Here are the nominees:Give Me the Sun directed by Ban ZhongYi, a documentary about seven aging Chinese women whose bodies and minds were irrevocably scarred by the unspeakable brutality they suffered during World War II, when they were often gang-raped for months until their families could ransom them. Some were lured into sexual slavery by locals working for the Japanese Army, who promised them work in factories or hospitals; others were simply abducted and enslaved in the nearest comfort stations.The American War, directed by an American veteran of the Iraq War, Dr. Daniel Bernardi, tells the story of the Vietnam War from the perspective of six Vietcong veterans: a soldier, an officer, an informant, a guerilla, a My Lai survivor and the leader of the Long Hair (all women) army. Using rarely seen North Vietnamese archival footage, animated illustrations and interviews set in homes, villages and prisons, The American War gives voice and character to Vietcong veterans.The Eve directed by Luca Machnich is a short film that tells a story about a young boy who dreams to meet the Santa Claus. This semi-horror film is chosen because the complexity of the mixed color made every frame of this film beautiful yet creepy.The Demilitarized Zone (DMZ) directed by Korean director Inchun Oh tells the story of the most dangerous zone in the world, which was established on July 27, 1953, when the Armistice Agreement was signed during the Korean War. This film stars Joo Min-ha who played as a female officer who tried to catch a jailbreaker in DMZ.Michael directed by Satrajit Sen is a Bengali film that revolves around a person working man who dreams to be a film director.Among the VVIP guests of the event are: the king and queen of Keraton Amarta Bumi, Sri Anglung Prabu Punta Djajanagara Cakrabumi Girinata and Kanjeng Ratu Dinar Retno Djenoli; King of Tallo, Makassar, Haji Andi Abdul Rauf Maro Daeng Marewa; Sultan and Queen of Indrapura Indra Oesman and Triliyanti; Prince of War of Indrapura, Ir. KPH Randi Indra Syahdan; Princesses from the Kingdom of Aceh Tamiang, Teuku Marini and Teuku Marina; Queen of Papua Barat, Petuanan Tanah Rata Koko Imeko; King of Samosir, King Chalid Robin Gultom; King of Gorontalo, Yohama; Prince Hari of Kutai; King of Gorontalo, Rudi Wahab; King of Luwun Timur, Saiful Daeng Marewa; King of Toba, Sorimangaja. Six Excellencies from six countries also attend this event. From Suriname, Ricardo Vanca; Rusia, Alexander Smirnov; Armenia, Lilit Sargsyan; Libya, Massoud Koshly; and from Saychelles. MaXiang from China also received special awards during the event.Media Contact: Christina Film Festivals Alliance PO BOX 6987 Jakarta JAT PK 13710, Indonesia http://www.filmfestivalsalliance.org

09-26-2014 | Energy & Environment
Waste King
Waste King announces headquarters’ move
Waste King - a specialist collections, clearance and recycling company that focuses on providing a service which is highly environmentally friendly – is moving its headquarters from the Frogmore Industrial Estate at Two Waters, Hemel Hempstead, to the Old Ministry Airfield, in Cheddington. Waste King’s Operations Director, Andy Cattigan, explained: “For some time, Waste King has been experiencing a steady and continual increase in its customer base. With this has
11-29-2012 | Energy & Environment
Waste King
Waste King rescues threatened snakes
Waste King, the specialist collections, clearance and recycling company, is becoming used to rescuing distressed livestock as part of its day-to-day activities. It has now added two grass snakes to its list which began, in August 2011, with ‘Colin’ a Giant African Land Snail. In the last few weeks, while helping a Watford-based customer clear garden rubbish, Waste King’s operatives came across two grass snakes – which had chosen to hibernate
11-11-2011 | Business, Economy, Finances, B …
Enovabiz Solutions, Dallas,Texas USA 75201
Quality Content is King
Content is king” has been for years the mantra for getting rankings in Google and other search engines. For many SEO consultants, it was the cornerstone of their whole SEO campaign. The belief is that the more content a website has, brighter the chances of ranking high in search engine results. Another spinoff of this theory was that companies not only started putting up large number of pages on their
10-31-2011 | Energy & Environment
Waste King
Sky becomes the limit for Waste King
Waste from high value projects has been a feature of recent work for the specialist collections, clearance and recycling company, Waste King. Waste King’s uniformed, Environment Agency-licensed staff began by recycling 1.1 tons of props and 15 cubic yards of mixed waste from the set of a ‘prank-themed’ TV show being shot by an independent company for Sky TV. They then moved on to collect 18 yards of mixed waste, including packaging,
07-19-2011 | Energy & Environment
Waste King
Waste King recycles for charities
The specialist collections, clearance and recycling company, Waste King, has teamed up with the British Heart Foundation (BHF) and the Salvation Army in order to help other people’s waste materials benefit those in need. A few months ago, Waste King installed a recycling point for clothes and shoes at its premises in the Frogmore Industrial Estate in Hemel Hempstead – along with a BHF ‘book bank’, for used books. According to the
12-30-2010 | Associations & Organizations
Link Building King
Link Building King Launches Link Building Services
In the internet, when you want to earn much, you would need to ensure that your products stay at the top list and you have a good marketing strategy that can continuously attract customers. Online businesses like any other non virtual businesses we have need to survive in the form of a good internet marketing strategy. There are many applications and internet tools provided in order to maximize the resources
Comments about openPR
OpenPR is clearly structured and remains true to its principle of confining itself to the essential parts. OpenPR has proven to be a very good and reliable partner to our media agency: Within the shortest time the releases are online and go down well with the media representatives. The success of OpenPR is reflected in the steadily increasing number of press releases. It is good that OpenPR exists!
Ursula Koslik, Director Marketing & PR, F+W Hamburg