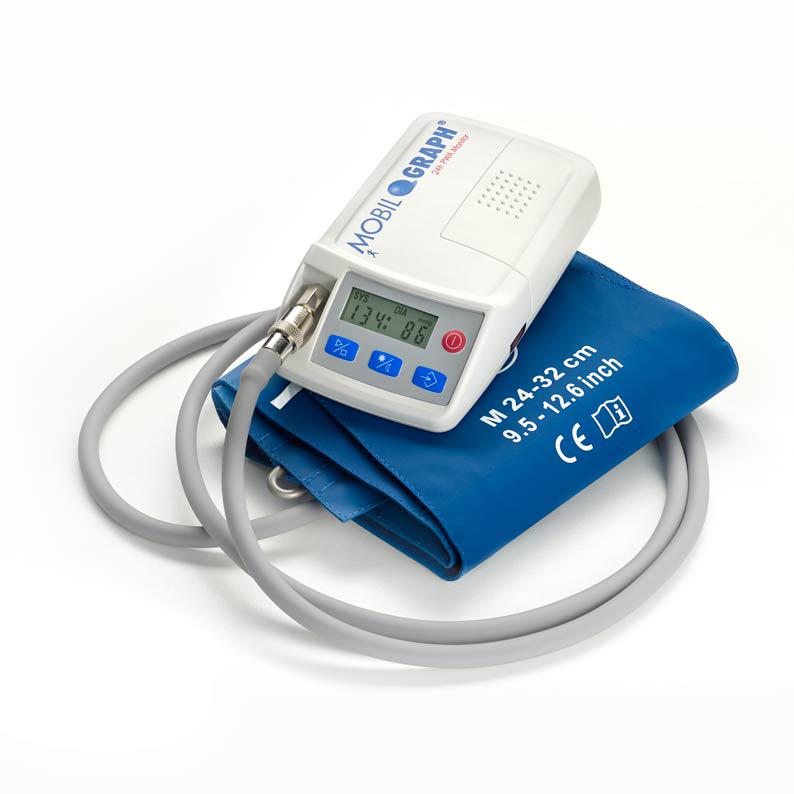 Mobil-O-Graph® PWA of German medical device manufacturer I.E.M. deployed in ISS space research on vascular aging Monitor for pulse wave analysis transported to the ISS The Technology from I.E.M. (Stolberg, Germany) and AIT (Austrian Institute of Technology, Wien) are on the International Space Station (ISS) since 4th April. Measurements will start tomorrow.On 2nd April, a Mobil-O-Graph® from I.E.M. with the integrated AIT ARCSolver® algorithm for determining arterial stiffness started to the ISS. The transport was commissioned by the Canadian Space Agency and carried out by the 14th commercial resupply mission by Space X to the crew of the ISS expeditions 54 and 55. The measurements are planned to start 17th May.Our cardiovascular system has adapted in the course of evolution to the conditions on Earth. The heart pumps blood through the arteries, supplying oxygen to the cells throughout the body. Due to the changed gravitational forces in space, this system is disturbed, since in weightlessness a redistribution of blood and tissue fluids occurs. In addition to immediate effects, there are also long-term changes in the cardiovascular system, which can be attributed to the adaptation of the body to the changed environmental conditions. To deepen the understanding of the effects of microgravity on the cardiovascular system, the Canadian Space Agency is using the arterial pulse wave analysis methodology as part of its vascular aging project. The pulse wave analysis algorithm was developed by the AIT Austrian Institute of Technology (Vienna / Wiener Neustadt, Austria) and is integrated in the 24-hour blood pressure monitor Mobil-O-Graph® PWA (I.E.M., Stolberg, Germany). The device has been validated in multiple studies and was selected by the Canadian Space Agency for its precision and ease of use. Previous studies by Canadian space physicians have found evidence that the arterial system ages 10 to 20 years during a six-month space visit. This will now be examined more closely with the help of the Mobil-O-Graph®. The oscillometric pulse wave analysis allows the evaluation of the arterial stiffness as well as the pulse wave reflections in the vascular system. Due to the noninvasive measurement method, similar to a conventional blood pressure measurement with upper arm cuff, such a measurement can be done quickly and independently by the nine astronauts planned to carry out the project. Measurements before, during and after the space stay give a temporal course of the measured quantities. Thereby, the effects of weightlessness and the degree of remission after the return to Earth can be determined. While the Mobil-O-Graph® PWA for pulse wave analysis has already found its way into clinical research and practice worldwide, it will now also make an important contribution to the understanding of the human cardiovascular system in the field of space physiology. The deduced knowledge is also of great importance for the planned flights to Mars in the near future. Moreover, the findings will be incorporated into the further development of the technology thus benefitting patients on Earth. Further details about the scientific experiments can be found at the Canadian Space Agency project website: http://www.asc-csa.gc.ca/eng/sciences/vascular.aspI.E.M., located in Stolberg/Germany, is a researcher, developer and manufacturer of validated medical products and services in the field of cardio-vascular screening, diagnostics and follow-up management. I.E.M.’s integration of pulse wave analysis algorithms into an ambulatory blood pressure monitor, allowing for the additional capture of aortic blood pressure, aortic pulse wave velocity and further hemodynamic parameters within the same procedure of the 24h measurement, is internationally known. The Mobil-O-Graph® PWA system has been validated invasively and against non-invasive reference techniques.In addition, I.E.M. introduced the Tel-O-Graph® device, a telemonitoring home blood pressure monitor with in-built mobile phone / BT technology. The I.E.M. product portfolio additionally includes telemonitoring equipment for the capture of all common vital parameters, in particular for support in heart failure programs.I.E.M. products are manufactured in Germany since 1993.Thomas Korth Head of Marketing I.E.M. GmbH Cockerillstraße 69 52222 Stolberg Germany Fon: +49 2402 9500-85 Fax: +49 2402 9500-11 Mail: t.korth@iem.de Web: www.iem.de

08-28-2020 | IT, New Media & Software
iCare Solutions
iCare Solutions Announces Availability of a New Release of its COVID-19 Tracker …
Cairo— 08/25/2020 — iCare Solutions has launched a new release of its COVID-19 Tracker App with worldwide coverage and stats, and new features to perform data analysis/comparisons and to explore/compare Google mobility trends, enabling users to get statistics regarding the current outbreak of COVID-19 around the world and gain insights about the pandemic such as how rapidly the virus is expanding and how your community is moving around differently due
07-31-2020 | Logistics & Transport
Motherload
Motherload extends services and transporter network
Port Saint Lucie, FL Today, Motherload announced immediate availability of Added shipping categories (Pets, Personal Items, Household Moves and Business Moves/Relocations), and allowing brokers and independents access to bidding on our freight matching app. Version 1.1 has been updated to version 2.0 with an automatic update to allow access to these new features. “This will help any shipper get competitive rates and allow a larger collection of transporters access to available
06-05-2020 | IT, New Media & Software
Report Consultant
Progressive Web App (PWA) Development Market Analysis Highlighting Opportunities …
Progressive Web App (PWA) Development is web apps that use emerging web browser APIs and features along with traditional progressive enhancement strategy to bring native app-like user experience to cross-platform web applications. Progressive Web Apps are a useful design pattern, though they aren't a formalized standard. PWA can be thought of as similar to AJAX or other similar patterns that encompass a set of application attributes, including the use of
01-08-2019 | IT, New Media & Software
Biz4Solutions LLC
Biz4Solutions bags a spot in the top 10 Progressive Web App (PWA) Companies in t …
Frisco, TX. It gives immense pleasure to share that Biz4Solutions is amongst the top 10 Progressive Web App Development Companies in the U.S by Developmobile.app, the world’s best verified mobile app review firm. Biz4Solutions, established in 2011, has delivered tremendous results in IoT development, Mobile/Web application development and has successfully carried out its projects in the domains of Healthcare, Water, Education, Hospitality, Insurance (Auto), Mortgage, Banking, Ecommerce, Travel, Telecom, Retail
06-08-2018 | IT, New Media & Software
Yalwa GmbH
askalo: Finding Cars, Properties and Jobs Made Easy
The new classifieds search engine already has more than 30 million listings and is available in over 40 countries worldwide. Wiesbaden, Germany: Today, Yalwa, a leading company in the field of classifieds, has announced the public launch of https://www.askalo.com/ – a free vertical classifieds search engine for cars, properties and jobs. askalo brings ads together from hundreds of websites and presents them in just one search. Its mission is to help
12-10-2011 | Business, Economy, Finances, B …
Polymet Corporation
Hardfacing Wire Manufacturer Polymet Corporation Will Visit Customers and Distri …
CINCINNATI, OH – Polymet Corporation, a leading producer of hardfacing wire, welding wire and thermal spray wire, will be traveling to Japan and South Korea in yearly December 2011 in order to support its aerospace, lumber, valve and thermal spray wire business in these markets. Working together with local distributors and representatives enable the company to expand its global reach and promote its product lines in Asia. Danny Newman, hot
Comments about openPR
I can't but agree to the positive statements about your portal: easy to use, clear layout, very good search function, and quick editing!
Jens O'Brien, Borgmeier Media Communication