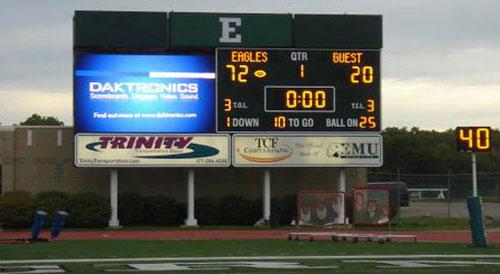 Brookings, S.D., announced that it has designed, manufactured and installed a new video, scoring and sound system on the campus of Eastern Michigan University in Ypsilanti, Mich. Since the start of this season, football fans at Rynearson Stadium have enjoyed an improved experience thanks to a new Daktronics light emitting diode (LED) video display, custom scoreboard and a Sportsound® 2000HD sound system. "This new scoreboard demonstrates the commitment Eastern Michigan University has for its football program," said Director of Athletics Dr. Derrick Gragg. "We strive to be the very best we can be, and having a Daktronics scoreboard of this magnitude will provide abundant benefits for our team, recruiting and the overall football game-day experience." The Eagles’ new PS-23 LED video display measures approximately 13 feet high and 24 feet wide. It features game replays, interactive entertainment, player information and key stats, keeping every fan in the Eastern Michigan stands informed and entertained. “One of our largest challenges was the tight timeline we were under for completion prior to EMU’s first football game,” said Jeff Buckley, Daktronics Sales. “Everyone on the project team came together, and with the great communication we had with EMU athletics and staff, we were able to have a flawless first event. The video board allows EMU so much more flexibility in replays, crowd prompts and sponsorship activation than ever before.” A new custom LED scoreboard measuring approximately 14 feet high and 29 feet wide sits directly next to EMU’s new video display. The scoreboard utilizes Daktronics industry-leading LED technology, and it has been engineered to stand up to all the elements Michigan’s weather will provide in the coming years. In addition, a booming Sportsound® 2000HD sound system sits atop the new display system at Rynearson Stadium. Daktronics new 2000HD systems are a result of years of fine tuning and engineering development. With a coverage area of 120 degrees, every Eagle in Ypsilanti will stay in the game with clear, powerful audio updates. Those supporters will join a growing group of football fans among Mid-American Conference schools that now enjoy Daktronics scoring and display equipment in 10 of 13 MAC football facilities. About Rynearson Stadium Rynearson Stadium begins its 41st season as the home venue for the Eastern Michigan University football and track teams in 2009. Opened in 1969, the facility is named for the late Elton J. Rynearson, Sr., who coached football at Eastern Michigan for 26 seasons. His teams compiled a record of 114-58-15. In one six-year period, from 1925-30, Rynearson’s teams won 40 games, tied two and lost just four. Just over two million fans have seen EMU play in Rynearson.About Daktronics Daktronics has strong leadership positions in, and is the world’s largest supplier of, large screen video displays, electronic scoreboards, computer-programmable displays, digital billboards, and control systems. The company excels in the control of large display systems, including those that require integration of multiple complex displays showing real-time information, graphics, animation and video. Daktronics designs, manufactures, markets and services display systems for customers around the world, in sport, business and transportation applications. For more information, visit the company’s World Wide Web site at: http://www.daktronics.com, e-mail the company at sales@daktronics.com, call (605) 697-4300 or toll-free (800) 325-8766 in the United States or write to the company at 331 32nd Ave. PO Box 5128 Brookings, S.D. 57006-5128.For more information contact: MEDIA RELATIONS: Mark Steinkamp Marketing Manager tel (605) 692-0200 e-mail Mark.Steinkamp@daktronics.comDaktronics Inc. 331 32nd Ave Brookings, SD 57006 USA Anne Larkin Phone 605 697 4965 Anne.Larkin@daktronics.com