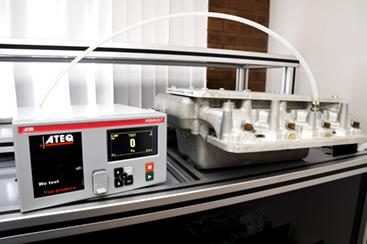 Learn the Who What When Where Why and How's of Leak Testing!What is leak testing?Leak testing is a form of non-destructive quality control testing that tests manufactured parts to make sure fluids can’t leak into or out of the part.When is leak testing used?When people think of leak testing, they may think of a leaky water bottle or a gas tank, but there are many less obvious applications from all different types of industries that require leak testing. Medical applications like syringes or appliance water circuits in washing machines or coffee makers also need to be leak tested to make sure water does not leak out of the product when it isn’t supposed to. You may have a phone that claims to be waterproof. This claim means there are strict leak testing requirements that need to be met to ensure that the product will not let any liquids or dust into the phone.Where is leak testing used?Leak testing can be used throughout the manufacturing process. It can be used in the product development lab to bench test prototypes. Leak testers can also be incorporated into machines in the factory production line to automatically test parts.Why is leak testing necessary?There are some products that may just be an inconvenience if they leak, like air getting into a bag of chips making them stale, but there are other applications where highly accurate leak testing can be the difference between life or death. Imagine if you had a pacemaker inside your chest sending electrical pulses to prompt your heart to beat at a normal rate. Now imagine if that pacemaker had a microscopic hole that allowed liquid to seep into it. The liquid could short circuit the pacemaker causing it to stop working or send irregular dangerous shocks into your heart. Who decides if leak testing is necessary for their application?Leak testing requirements are usually determined by manufacturing engineers. Once they determine that a product they will be manufacturing will need leak testing, those engineers work with ATEQ’s sales engineers to develop leak testing specifications to determine what type of leak testing will be best for the application and what the leak rate reject limit will be.How is a leak test performed?There are several different methods of leak testing. One of the most primitive and easy methods to conceptualize is a bubble test. This involves submerging a part underwater and seeing if any bubbles emerge from the product. There are several problems with this method. It is very time consuming and messy for the operator. It also does not give any precise measurements of exactly how much an application is leaking. ATEQ’s primary method of testing is pressure decay air leak testing. This means that the instrument injects the part with compressed air, measures the pressure, waits, then measures the pressure again to see how much the pressure dropped. If the measured leak rate is less than the designated reject limit, the part passes the test.ATEQ is a global manufacturer of leak/flow testing instruments used for non-destructive quality testing in a variety of industries to ensure the integrity of manufactured products.ATEQ Corp. 35980 Industrial Road Livonia, MI 48150

10-27-2021 | Business, Economy, Finances, B …
ATEQ
EUREKA ROBOTICS & ATEQ Corp. Enter Into Business Partnership
ATEQ Corp., a global leader in the manufacturing of leak and flow testers, and EUREKA ROBOTICS, provider of Robotics and AI technologies to automate High Accuracy – High Agility (HAHA) tasks, have entered into a strategic business partnership. Similar to ATEQ, EUREKA ROBOTICS supplies technologies and systems for production lines within a variety of manufacturing industries including optics, electronics and automotive. “ATEQ and EUREKA ROBOTICS share a similar customer base
07-05-2021 | Logistics & Transport
ATEQ
ATEQ NEW BCA (BATTERY CHARGER ANALYSER)
ATEQ Aviation (www.ateq-aviation.com) introduces a new battery charger analyser, the ATEQ BCA. With this new configuration of charge/discharge benches, this version has been specially designed to respond to customer’s needs for maintenance, certification and homologation of all aviation battery types worldwide. Improved user interface Thanks to its new 7 inch LCD touch color screen, the new ATEQ BCA has a new ergonomic design enabeling a better user experience for any avionic
06-10-2021 | Business, Economy, Finances, B …
ATEQ
ATEQ Welcomes New Quality Technician, Brian Hartkopf
Livonia, MI - June 10, 2021 – ATEQ Corp. welcomes Brian Hartkopf as a new Quality Technician in its Industrial Division. Hartkopf will be responsible for quality-related tasks such as quality control inspections, instrument adjustments & calibrations and collaborating with the production team. Hartkopf has past experience working in the Aviation Field and Electromagnetic Compatibility field living in Arizona, Michigan and traveling to other regions in the world. When he's not at
04-13-2021 | Business, Economy, Finances, B …
ATEQ
ATEQ Announces Piedmont Technical Sales as a New Business Partner
ATEQ Corp., manufacturer of leak and flow testers, and Piedmont Technical Sales, representative of automation components, have announced their strategic business partnership. ATEQ has been opening several offices around the country over the last few years to increase its ability to locally serve customers. The addition of Piedmont Technical Sales will give professionals with extensive knowledge of ATEQ instruments the ability to better support customers located in North Carolina, South