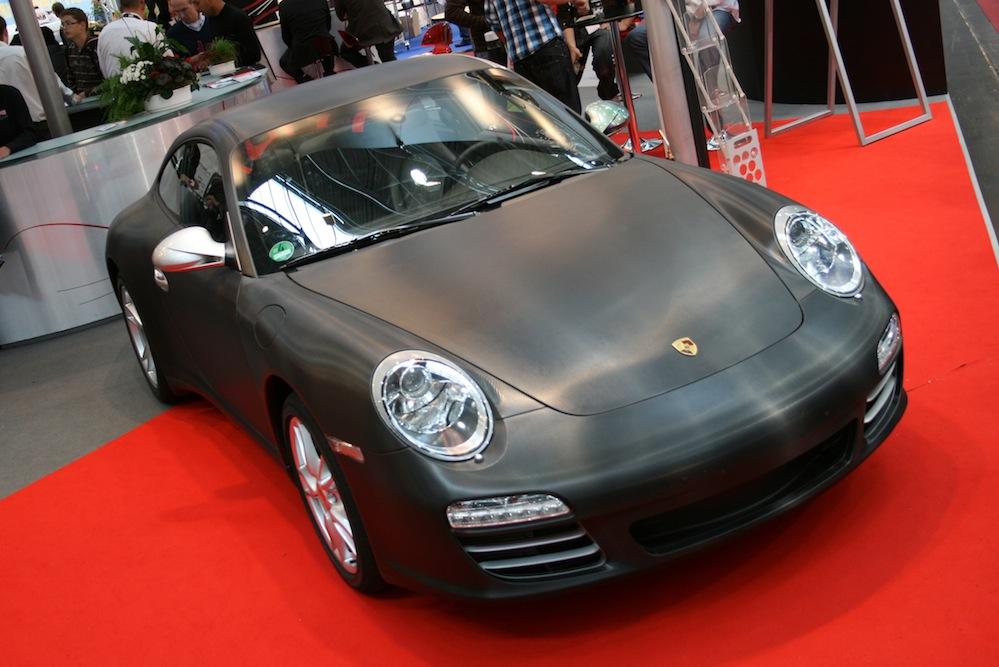 Hexis has launched a new cast vinyl with a carbon fibre look destined for wrapping applications. The company is promoting the new line with a dedicated mini-site: ilovehx.com.Part of the HX30000 Series, the “Carbon Cast” is a multi-layered 135µm cast vinyl film with a carbon fibre embossed pattern. It carries the proven solvent-based adhesive and a structured PE liner with Hex’Press technology that allows convenient air egress during application. With its flexibility and high conformability fast and risk free it is principally destined for vehicle full wraps and other long-term outdoor applications. It is the ideal high-tech solution for heavily curved surfaces such as full vehicle wraps, furniture, laptops, cell phones and many more.The new HX30000 Series also includes 2 Variochrome shade shift colours, a pearl white and an iridescent purple, and a super black matt. They are also multi-layered cast vinyl films carrying the same solvent-based adhesive and structured PE liner with Hex’Press technology that make the film repositionable during application. Because of its high flexibility and extreme conformability fast and risk free transfers are practically guaranteed. It is particularly suitable for vehicle full wraps and for all long-term applications on complex and compound curved surfaces. With the shade shift feature highly effective colour effects can be achieved.The standard rolls are 1370mm (54in) wide. 63-inch (1600-mm) rolls will be available later.Samples and catalogues are available directly from local Hexis distributors.www.ilovehx.comHexis manufactures a full line of graphic vinyl and digital printing media used for sign making and vehicle markings. The company is based in Frontignan, near Montpellier, France with subsidiaries in Germany, Italy, Spain and the United States and affiliate Hexis companies in the Netherlands, Switzerland and the UK. The group exports some 40% of its sales to over 40 countries worldwide, with a consolidated turnover of EUR 40.1 million in 2008.www.hexisgroup.comMartin Kugler Hexis S.A. Horizons Sud 34110 Frontignan France Tel. 0033 - 467 18 66 84 Fax 0033 - 467 18 36 98 e-mail martin.kugler@hexis.fr

10-10-2012 | Business, Economy, Finances, B …
Hexis S.A.
Michel Mateu of HEXIS wins Ernst & Young Entrepreneur of the Year Award
Michel Mateu, President of HEXIS S.A., manufacturer of self-adhesive media with headquarters in France, received the coveted 2012 Entrepreneur of the Year Award for the Mediterranean region jointly awarded by Ernst & Young and the news magazine L’Express recognizing his continued effort in innovative entrepreneurship. The prize rewards Mateu and his business, which operates 2 production sites in France, for his innovative entrepreneurial performance and an annual growth rate of over
05-12-2011 | Industry, Real Estate & Constr …
Hexis S.A.
HEXIS with New Cast Films at FESPA Digital 2011 in Hamburg
HEXIS will be exhibiting at this year’s FESPA Digital taking place in Hamburg, Germany to demo their Latex digital printing film and gloss laminate destined for wrapping applications. Both films are free of all materials with certain environmental issues such as PVC, solvents, plasticizers and heavy metals. The compound is flexible and conformable enough to be suitable for car wraps and in general applications that demand a conformable film. The HXL300WG2
09-18-2010 | Industry, Real Estate & Constr …
Hexis S.A.
HEXIS with new website
HEXIS launches its new Internet appearance: www.hexis-graphics.com With the new manufacturer's website HEXIS targets professionals, distributors and signmakers that are seeking information on products and solutions offered by HEXIS for their own activities and their businesses. HEXIS seeks to revitalize the availability of information and exchanges with all those interested in our company: customers, decision makers, prescribers, advertising agencies and journalists. The new site is more comprehensive and user-friendlier. Topics are directly accessible
04-22-2010 | Industry, Real Estate & Constr …
Hexis S.A.
Hexis Releases New Product Catalogue
Hexis, the vinyl manufacturer, has released the 2010 issue of their catalogue featuring a number of new products. The new catalogue comes redesigned with a fresh new look and feel and includes detailed product information. It includes technical details, applications for each product and recommended tools and laminates to use with each film. The catalogue was designed to assist customers in choosing the right product for their application. Hexis is proud to