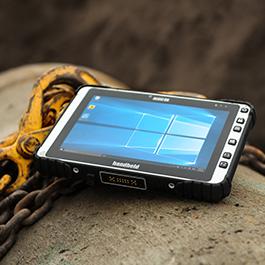 There are several disadvantages of using regular smartphones. Although regular phones are good for mundane operations, they are not suitable for heavy-duty applications. Most smartphones tend to break if they fall from great a height. Ordinary devices are prone to damages, as they are brittle and cannot operate in rough external conditions. Rugged Mobile understands the necessity of heavy-duty handhelds. Its extensive range of rugged devices is designed with durable materials to extend unprecedented strength and support.All its rugged computers come with ultra-tough exteriors which can withstand severe shock and tough industrial circumstances. This is why rugged devices are apt for a number of industrial applications, from mining, construction to field research.Some Benefits of Rugged HandheldsApart from high durability, rugged devices are recognised for a host of advantages.To begin with, rugged devices can function in all types of exposed working conditions, as all the products are rigorously tested according to military standards. Some of the parameters on which rugged handhelds are tested include temperature range, MIL-STD and IP rating. Due to the rugged quality of the devices, rugged handhelds are immune to ballistic shocks and extreme temperatures. Rugged devices come in various forms, as tablets, notebooks, mobile phones and handhelds, serving myriads of functions, from scanning, collecting data, crunching numbers, browsing graphics to mobile ticketing. Some devices have barcode scanning facilities and are suitable for logistical operations. Most of the rugged devices come with one or more 2500mAH batteries, allowing users to use the device for a long period of time. Products on OfferJagged in appearance and available with easy-to-use interfaces, Rugged Mobile’s impressive range of heavy-duty products have a number of pronounced advantages over regular smart devices, which are incompetent for rough operations. Some of its key products are listed below:Algiz® 8X Algiz RT7 Algiz 7® Algiz® 10X Nautiz X1® Nautiz X2 NAUTIZ X4 Nautiz X8 Nautiz eTicket Pro II For more information about Rugged Mobile, visit their official website: http://www.ruggedmobile.co.za/About Rugged Mobile Based in Johannesburg, Rugged Mobile is South Africa’s leading destination for heavy-duty appliances. Its impressive range of rugged devices, which includes various types of mobile phones, notebooks, tablets and handhelds, is one-of-its-kind, boasting a number of advantages. Operational in extreme conditions, Rugged Mobile’s ultra-rugged devices are fit for any types of field activities, from mining, farming, logistical applications to scientific research.186 Smit Street, Fairland, Johannesburg Gauteng, 2195, South Africa Tel: 011 476 4779

05-21-2019 | Media & Telecommunications
Rugged Mobile
Your Destination for Rugged Mobile Computers
Rugged Mobile is a company in South Africa offering rugged mobile devices that extend your computing to the field. These computers work in harsh environmental conditions like working in muddy areas, construction sites or where exploration is being carried out. Rugged computers are lightweight, cost-effective and extremely durable. All Rugged Mobile computers offered by this company are water and dust resistant. They can work in extreme-temperatures starting from -30°C up to
06-19-2018 | Media & Telecommunications
Rugged Mobile
Rugged Mobile: One-Stop Destination for Rugged Mobile Phones, Tablets
Rugged Mobile is a South-Africa based company that specialises in the supply of extremely durable Mobile Phones, Notebooks and Tablets which are known to offer unmatched toughness. These Phones and Tablets serve a wide variety of uses. The Mobiles, Tablets and Smartphones offered by the company are highly functional and durable. What is a rugged mobile? There are usually three common tests which determine the durability of a device. The three most
Comments about openPR
OpenPR is clearly structured and remains true to its principle of confining itself to the essential parts. OpenPR has proven to be a very good and reliable partner to our media agency: Within the shortest time the releases are online and go down well with the media representatives. The success of OpenPR is reflected in the steadily increasing number of press releases. It is good that OpenPR exists!
Ursula Koslik, Director Marketing & PR, F+W Hamburg