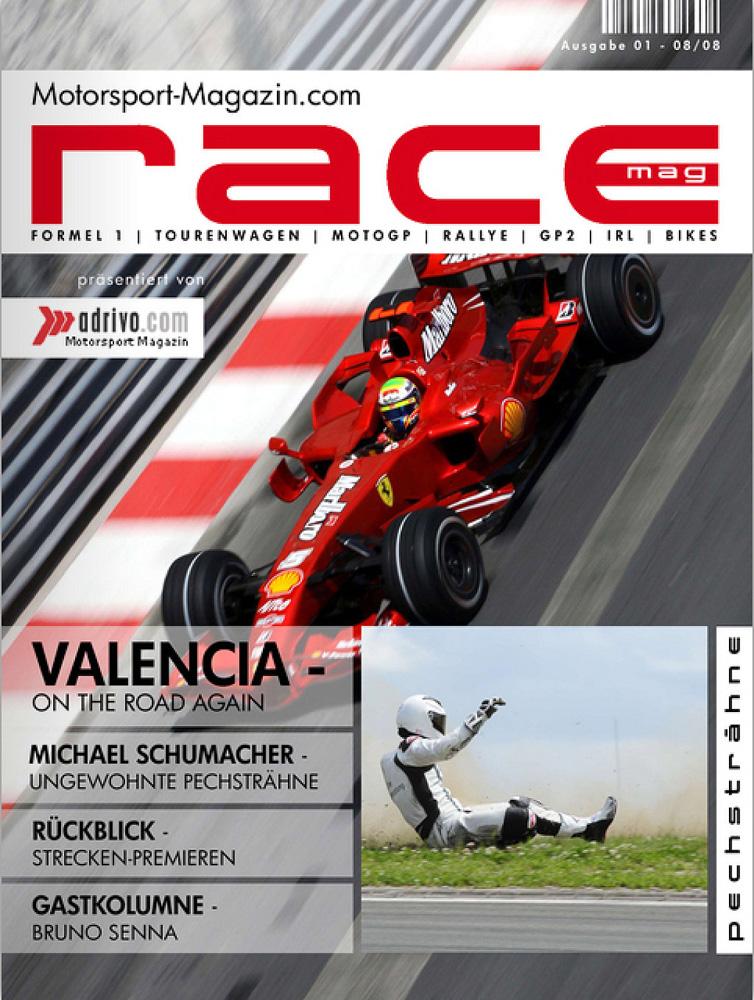 Kimi Räikkönen and Nick Heidfeld, two former Sauber team-mates, have come in for some hefty criticism. "Kimi needs to shift up a gear. If he carries on in this fashion, Formula One will simply shred him," warns former F1 driver Christian Danner in an interview with Motorsports-Magazine.com.The form of Räikkönen's team-mate Felipe Massa is improving all the time, which has attracted praise from his patron Peter Sauber. "He outclassed Hamilton this weekend." The Swiss racing boss is less complimentary about the Finnish half of the duo: "Kimi was always automatically fired up for any race. But perhaps those flames aren't buring quite so bright any more," speculates Sauber in conversation with Motorsports-Magazine.com.Another ex-protegé of Sauber is also feeling the pinch. "Things are looking bad for Heidfeld," believes Danner. "That was pathetic. He started ahead of Rosberg and crossed the finishing line after him. A constructor such as BMW can't afford a situation like that. I'm not blaming Heidfeld himself. It's simply that the car doesn't suit him."Press contact: Stephan Heublein Tel: +49 (0)89 500 948 84 Email: redaktion@adrivo.comadrivo Sportpresse GmbH Liebenauer Hauptstrasse 106/6 A-8041 Graz Tel: +43 (0)316 915 252 Fax: +43 (0)316 915 253 Email: info@adrivo.com www.adrivosportpresse.comAbout adrivo Sportpresse GmbH: adrivo Sportpresse GmbH publishes at www.Motorsports-Magazine.com one of the most popular motorsports online magazines. The website reaches a core fan base in Germany, Austria and Switzerland. It captures all the magic and glamour of motor racing, bringing its visitors compelling reports from all the different championships.The company also runs the official websites of Michael Schumacher and Formula One star Nick Heidfeld as well as working in close cooperation with some of the major figures in international motor racing.Furthermore, adrivo Sportpresse GmbH provides and distributes high quality editorial motorsport content. The flexible and customizable content portfolio is available in up to 10 languages. The clients include relevant on- and offline media like Spiegel, AutoBild, T-Online, Lycos etc. as well as companies that sponsor motorsports like DHL, Deutsche Post World Net, Bridgestone, and many more.Through Motorsports-Magazine.com and our client’s adrivo media network we reach around 4,5 million motor racing fans each month. Our content has become very influential and an opinion maker in Germany, Austria and Switzerland!

You can edit or delete your press release Motorsports-Magazine: Räikkönen's fire goes out here

09-02-2008 | Sports
adrivo Sportpresse GmbH
Formula One news: Senna still without F1 contract
The F1 race calendar is building up to its finale and the silly season reaching a climax as the countdown begins for the Italian Grand Prix at Monza. One face that could be slotting into the 2009 drivers’ group photo in Melbourne is that of Bruno Senna. Toro Rosso, Williams, BMW Sauber - his name has been bandied around in connection with all of them. “All I can say at
08-04-2008 | Sports
adrivo Sportpresse GmbH
Philipp Eng: Pastures New In Hungary
Philipp is back into his race rhythm. Two weeks ago, Hockenheim was the venue for his return to Formula BMW Europe; in Hungary, he continued his re-acclimatisation on an unfamiliar circuit. Unfortunately, he had to contend with obstacles of a varied nature, ranging from technical problems to other vehicles. What went right and what went wrong? A retirement and a P18 don’t exactly resemble a victory parade, yet Philipp is confident that
07-30-2008 | Sports
adrivo Sportpresse GmbH
Tim Sandtler: Continuing to make headway
Tim had mixed feeling about his return to Brands Hatch. Friday brought a sensation of déjà-vu, as he was already familiar with the 1.93km reduced-length circuit from the Formula 3 Euro Series. For the qualifying session on Saturday and without any extra time for free practice, they switched to the 3.7km full-length circuit which Tim and half the other contestants had never driven on before. “The additional part of the track
07-16-2008 | Sports
adrivo Sportpresse GmbH
Tests at Hockenheim, enough of Barcelona
Between 1992 and 2008, there was no Formula One testing at Hockenheim. Last week, the teams made their return in preparation for the German Grand Prix. According to David Coulthard and Lewis Hamilton, it was not possible to do much more than work on the setup for the race weekend. “I don’t think we can learn a lot about the car here,” said Coulthard in conversation with motorsports-magazine.com. “It’s not

12-27-2018 | Advertising, Media Consulting, …
QandQ Market Research
Amino Acid Based Formula Market
https://www.qandqmarketresearch.com/reports/7308524/amino-acid-based-formula-market-8 Amino acidbased formula, also known as an elemental formula, is a type of hypoallergenic infant formula made from individual amino acids. The amino acids are in the simplest form, making it easy for the body to process and digest. Neocate, EleCare and Nutramigen Puramino are the more commonly encountered brands of amino acidbased formula. The global Amino Acid Based Formula market is valued at 780 million US$ in 2018 and will reach
06-18-2012 | Business, Economy, Finances, B …
saxoprint limited
Visit Formula 1 with Saxoprint
Saxoprint: Win tickets for the race weekend in Silverstone. Sweepstake by Saxoprint is still going on until June 24th, 2012 Saxoprint goes Silverstone – Saxoprint is giving 2 weekend ticket away for the probably most diverse race of the season. The tickets have a value of more than £ 300. Fast curves, a mix of long straights and curves as well as the typically British weather make this race so unique.
05-31-2011 | Tourism, Cars, Traffic
One Concierge
One Concierge Offers Formula One Experience
One Concierge, a global concierge service provider, launched today a new lifestyle experience in which clients can sit behind the wheel of a Formula One car and experience their very own Grand Prix. Clients will be able to drive genuine Grand Prix Formula One cars such as the 720 horsepower, Arrow A18 racecar or if preferred they can also race around the track in a Ferrari, Lamborghini and various other
12-13-2010 | Science & Education
Earth/matriX Editions
Einstein's Formula: Mass Confusion
PRESS RELEASE PRESS RELEASE PRESS RELEASE PRESS RELEASE New Publication - Earth/matriX Editions For immediate release: New Orleans, Louisiana, December 11, 2010 ©2010 Copyrighted. All rights reserved. Title: Einstein’s Formula: Mass Confusion ( c^9 = c^7c^2 the Basis of E = mc^2 ) Author: Charles William Johnson Physicists have praised Einstein’s formula, E = mc^2 as the discovery of the square of the speed of light in a vacuum, c^2 and
11-12-2010 | Health & Medicine
MyBeautySecrets.co.uk
MyBeautySecrets.co.uk Announce Product Rebranding and New Formula
Kempston, United Kingdom (29 October 2010) – MyBeautySecrets.co.uk, a leading UK online supplier of beauty products, announce the rebranding of Vein Away products with new, modern packaging, as well as an improved formula developed by MyBeautySecrets.co.uk chemists. MyBeautySecrets.co.uk know that are many beauty products on the market which state they can reduce physical imperfections; however they don’t always live up to their promises. Nonetheless, MyBeautySecrets believe that there are some
02-25-2008 | Tourism, Cars, Traffic
Mandoga Media
FORMULA MASTER SERIES 2008: ENGINE UNVEILED
Formula Master today exclusively unveiled the Honda K20A engine, which will power the Formula Master race cars this season. Featuring lay-out revisions to reduce weight, it will include a new air intake system with four dry-by-wire throttles, new pistons, conrods dry sump, oil pump and water pump. Series Chairman Mauro Sipsz said: \"We are really happy with how all the development has gone on the Honda K20A engine over the past months.
Comments about openPR
OpenPR is clearly structured and remains true to its principle of confining itself to the essential parts. OpenPR has proven to be a very good and reliable partner to our media agency: Within the shortest time the releases are online and go down well with the media representatives. The success of OpenPR is reflected in the steadily increasing number of press releases. It is good that OpenPR exists!
Ursula Koslik, Director Marketing & PR, F+W Hamburg