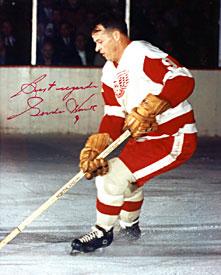 SOUTH FLORIDA - Hollywood Collectibles, a sports memorabilia e-commerce company based in South Florida, will be hosting a public signing featuring hockey legends Gordie Howe and Bobby Hull on December 10th. The signing will take place at the Hollywood Collectibles store, which is located at 3311 Sheridan St. Hollywood, FL 33021. This event will be a great opportunity for hockey fans (especially those located in South Florida) to meet and greet two of the most highly accomplished athletes in North American sports history.Howe, who is often referred to as "Mr. Hockey", is a 4-time Stanley Cup champion who played for a variety of teams throughout his career, including most notably the Detroit Red Wings. A highly decorated former player, Howe has 23 NHL All-Star titles, 6 Art Ross Memorial Trophies, 6 Hart Memorial Trophies, and 4 Stanley Cup titles to his name. As of 2011, he has played in more NHL games than any other player ever (1767). Amazingly, he was a top 5 scorer in the NHL for 20 straight years. In 1972, Howe was inducted into the Hockey Hall of Fame.Hull, or "The Golden Jet", is also a hockey legend of the highest order. Born in 1939, Hull joined the Chicago Blackhawks of the NHL in 1957 at the age of 18. In 1961, Hull helped the Blackhawks win their first Stanley Cup title in 23 years. Five years later, in 1966, Hull made hockey history when he became the first player ever to score over 50 goals in a season. When he retired in 1980, Hull had 3 Art Ross Trophies, a Hart Memorial Trophy, a Lester Patrick Trophy, and a Stanley Cup title to his name. In 1983, he was inducted into the Hockey Hall of Fame. In 1998, he was ranked number 8 on The Hockey News' list of the 100 Greatest Hockey Players.For more information about the public signing on December 10th, contact the Hollywood Collectibles store directly at 800-844-7735 (toll-free) or 954-986-0707 (local for South Florida). Mail orders are welcome, or you can buy Gordie Howe and Bobby Hull memorabilia directly from the hockey memorabilia section of the Hollywood Collectible website.Hollywood Collectibles is a sports memorabilia retailer based in Hollywood, Florida. With over 25 years of experience in the sports memorabilia industry, we are one of the most trusted and respected memorabilia retailers in the country. We offer over 18,000 authentic sports memorabilia items, including signed jerseys, collectible sports cards, game used memorabilia, vintage collectibles, and much more. We also offer a wide selection of celebrity memorabilia.Hollywood Collectibles 3311 Sheridan Street Hollywood, FL 33021 (954)986-0707Contact: Gerry