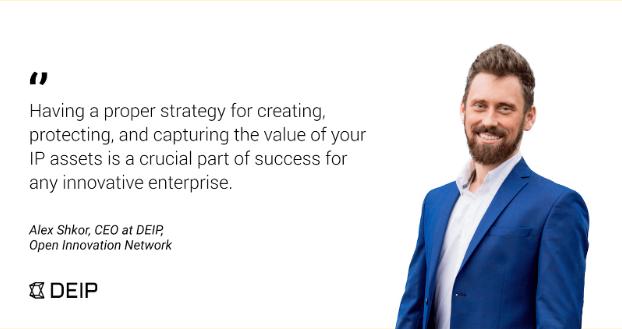 Blockchain experts realise a new feature singing NDA’s on the IP Ledger platform which allows certifying any document of intellectual property by blockchain“One of the main reasons our customers are using our platform is to secure their valuable IP assets from lawsuits, – says Alex Shkor, DEIP CEO. – Registering a document on our platform basically equals to anonymous defensive publication, which is one of the most common defensive IP strategies. The only difference – DEIP allows keeping all the intellectual property data private, and only digital fingerprint of the data is published into the DEIP blockchain. Our customers need to be sure that in case they want to share access to IP assets with partners, employees, investors – they can do it in a very secure way. We knew it from day 1, so integrating a non-disclosure agreements feature was just a matter of time. Now we’re finally happy to release it.”IP Ledger for Signing an NDABy using IP Ledger, users can invite anyone to sign a non-disclosure agreement before sharing a sensitive document. Choose who you want to share a document with (type the person’s email) Import the NDA to be signed. Set the contract validity dates. Send the contract. The other person will receive your invitation to sign by email. Once signed, the user that has initiated the process will get notified. Besides securing IP assets, DEIP IP Ledger makes possible to sign NDA using a digital signature on DEIP Intellectual Property Blockchain. This smart-contract will be referenced whenever any IP asset is shared within the platform. Sharing IP assets is performed using a highly secure cryptographic scheme. Once sharing is performed, it leaves an immutable record in the blockchain signed by both parties and referencing specific smart-contract. So 1) there is no denying that one has received IP assets, 2) there is no ambiguity under which terms this IP asset was shared.IP Ledger leverages the company’s own developed DEIP Blockchain. “Once a receiving party signs a non-disclosure agreement, a record about it is created in the blockchain; this record is impossible to be modified or deleted; the blockchain technology suits well in keeping important records”, explains Alex Shkor. He adds “At anytime a user can verify the authenticity of their signatures”.DEIPWORLD INC 660 4th Street, Suite 159, San Francisco, CA 94107, US Dana Malayeva PR & Communication manager dana@deip.worldDEIP is a Silicon Valley blockchain technology company, that allows - through the IP Ledger – certifications. The platform allows certifying any document, ideas, unique content, scientific research papers, inventions, trade secrets, contracts and more, by proving that they existed at a certain date and time. To learn more, visit: www.ipledger.co/

You can edit or delete your press release DEIP discloses a new feature: Signing NDAs by using blockchain is now possible here